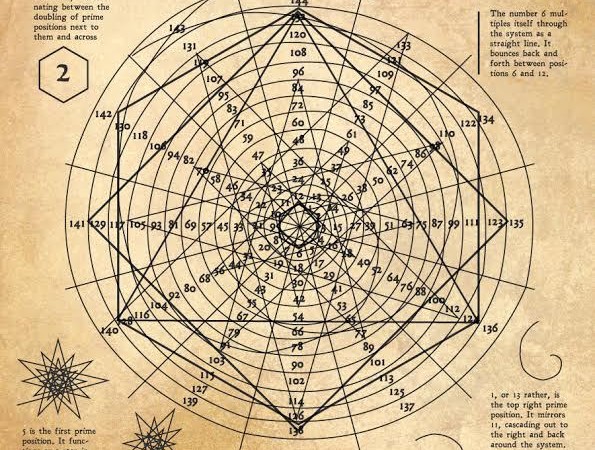 A recently discovered set of original Nikola Tesla drawings reveal a map to multiplication that contains all numbers in a simple to use system. The drawings were discovered at an antique shop in central Phoenix Arizona by local artist, Abe Zucca. They are believed to have been created during the last years of Tesla’s Free Energy lab, Wardenclyffe. The manuscript is thought to contain many solutions to unanswered questions about mathematics.

The Sketches were hidden in a small trunk with numerous other drawings and manuscripts ranging from hand-held technological devices to free-energy systems, many with notes scrawled all over them. Some of the pieces are already familiar to the public, but a few others are not. Most notably is the Map to Multiplication or the Math Spiral. Zucca made a few copies and showed the drawings around to different thinkers, dreamers, and mathematicians.

A few days later a Local High School Mathematics Instructor, Joey Grether, had been working on deciphering the system and had a few breakthroughs. Grether suggests that the Spiral not only explores Multiplication as an interwoven web, but that it, “offers a comprehensive visual understanding of how all numbers are self-organized into 12 positions of compositability.”

“This device allows us to see numbers as patterns, the formation of prime numbers, twin primes, Highly composite numbers, multiplication and division, as well as few other systems, I imagine, that are yet to be discovered.”

Tesla is known for the quote “If you only knew the magnificence of the 3, 6 and 9, then you would have the key to the universe.” It turns out that when the device is examined, the digital roots of the numbers in positions 3, 6, 9, and 12 constantly repeat the same sequence 3, 6, 9! Is this what Tesla was referring too? The self-organization of numbers and their digital roots?

Its hard to say, but Grether seems to think so. “This breakthrough is phenomenal. If we could get students all over the globe to use this technique, to play with it, and help figure out how to use it, we could overcome our cultural aversion to Mathematics. Instead of memorizing the multiplication table, we could learn the positions of numbers and have a better understanding of how they work.”

Juan Zapata, One of Mr. G’s students believes so as well… “I used to say I’m bad at Math… cause thats what everyone says, but now, I’m like, dude, this is too easy.”

Theres one other fact about the Tesla Spiral that make it interesting. The diagram is dated 12/12/12! 1912. Grether and his students want to turnDecember 12 into a national holiday. So grab a 12 pack, get a dozen donuts, and celebrate the power of 12x.