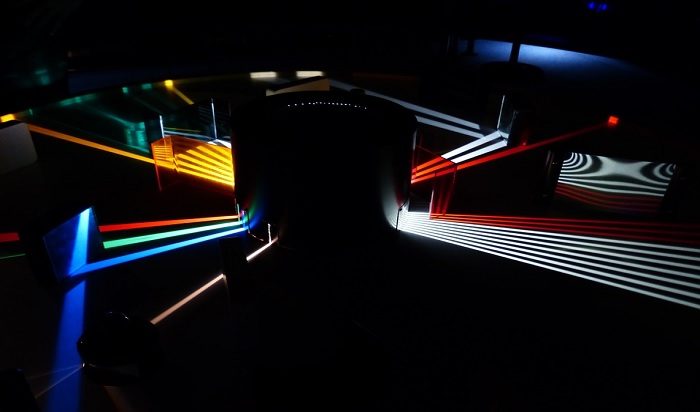 Physicists have built a ring in which pulses of light whip circles around each other and the normal rules that govern light’s behavior no longer apply.

Under normal circumstances, light displays certain kids of physical symmetry. First, if you were to play a tape of light’s behavior forward and then backward, you would see it behave in the same way moving in both directions in time. This is called time-reversal symmetry. And second, light, which can move through the world as a wave, has what is called polarization: how it oscillates relative to the motion of the wave. That polarization usually stays the same, providing another type of symmetry.

But inside this ring-shaped device, light both loses its time-reversal symmetry and changes its polarization. Inside the ring, light waves turn circles and resonate with one another, producing effects that don’t normally exist in the outside world.

Researchers already knew that, under certain circumstances, when light is bouncing around inside optical rings, it can lose its time-reversal symmetry. The peaks of its waves don’t turn up at the point that symmetry dictates they should inside the optical ring. But in a new paper, published Thursday (Jan. 10) in the journal Physical Review Letters, a team from the National Physical Laboratory showed that this can happen at the same time as spontaneous changes in polarization.

When the team pumped carefully timed pulses of laser light into a device called an “optical ring resonator,” the peaks of the light arranged themselves in ways impossible under time-reversal symmetry. As they circled one another, they formed patterns that only work in one direction in time. At the same time, the light lost its vertical polarization – its waves stopped moving in a strictly up-and-down way and instead formed ellipses.

This research, the physicists said in a statement, opens new doors for manipulating light. It will enable researchers to work with more precision and come up with new designs for optical circuits that go in devices like atomic clocks and quantum computers. And it tells science something about light that it had never known before.