A data buoy located in the ocean just off the coast of Oregon has indicated that a possible large earthquake could be about to strike the west coast of America.

The data indicates that the earthquake could strike the Cascadia Subduction Zone – an area where a magnitude 9.0 earthquake last struck in 1700.

According to the data buoy, the water column height (depth) fell sharply within minutes off the coast of Oregon, signaling the land beneath the ocean has suddenly “sunk.” Here are the graphs showing what the ocean data buoy recorded: 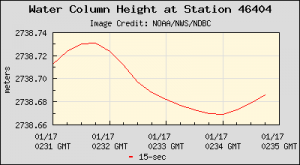 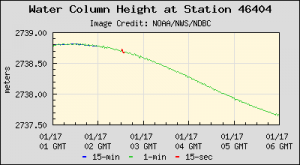 Here’s a map of the relevant Tectonic Plates: 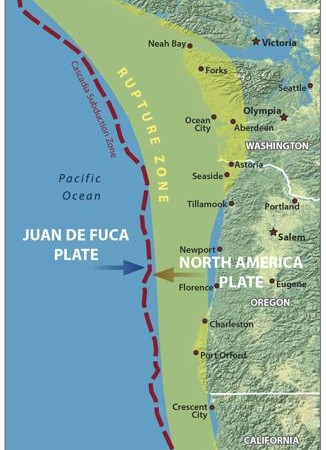 In the year 1700, a similar movement of plates is believed to have been the cause of a Magnitude 9.0 earthquake, which devastated the west coast of north America, and generated an ocean Tsunami that washed inland upwards of ten MILES!

Lest you think that four feet of ocean depth is nothing to be concerned about, be reminded that the entire column of water . . . all 8985 feet of it . . . is what dropped four feet. And it did so over an area several miles wide!

When the tectonic plate snaps back upward, it can launch that entire 8985 foot column of water upward and toward the shore!

As the continental shelf rises toward the shore (the ocean gets more shallow) that 8985 foot column of water starts accumulating upon itself as it moves toward shore, becoming one massive wave, perhaps 45-50 feet tall, that hits the shore for twenty minutes!

Now do you see why this is a big deal?

If such a thing were to happen today, hundreds-of-thousands of people would be killed as a fifteen meter (45 foot) wall of water came ashore well inland passing Interstate 5 and destroying everything its path from the beach to Interstate 5.

Here is a map of I-5, everything to the left of it (to the west) would be wiped out: 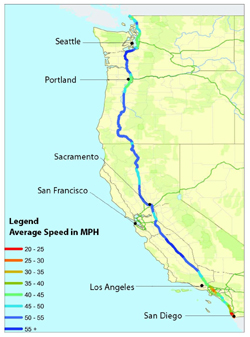 Mount Hood Volcano Can Be Triggered to Erupt

This type of Tectonic Movement has a direct effect upon the volcanos in the Cascadia Volcanic Chain, in particular, Mount Hood.

When the Juan de Fuca tectonic plate goes beneath the North American plate, it begins to get crushed. The heat from the friction of the two massive plates rubbing together, melts the Juan de Fuca plate into Magma (lava).

Directly next to the Cascadia Subduction Zone is the Mount Hood Volcano. Here’s a graphic to show you the relevant details: 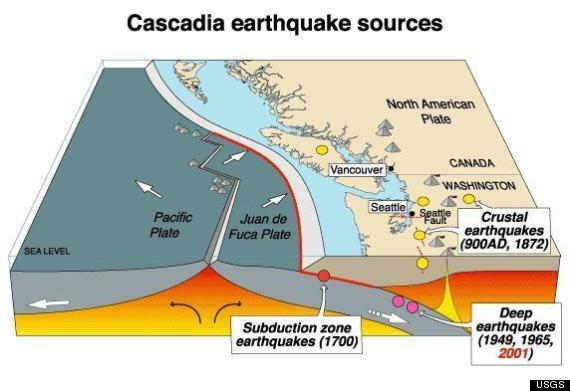 All along the Cascadia Subduction Zone are volcanoes. Most of them are inactive, but some are quite active. Here is a map of the volcanoes in the Cascade Mountains Range, so you have an understanding of the pressure relief valves (volcanoes) created over millions of years by these two tectonic plates scraping together. Mount Hood is to the right (east of) Portland, Oregon . . .

There is a magma tunnel leading directly from the Cascadia Subduction Zone straight up into Mount Hood! As the Juan de Fuca tectonic plate is being crushed (right now) it is melting into magma (lava). Whether or not there is enough magma to cause Mount Hood to erupt is unknown.

There has merely been an “event” in the Pacific Ocean off the coast of Oregon in the Cascadia Subduction Zone. This is a very rare occurrence with serious implications. It is worthy of very close monitoring by persons in the potentially-affected areas. This event is a potential warning of a POSSIBLE pending large earthquake on the west coast. There could also be an eruption at Mount Hood.

Folks in Washington, Oregon and northern California as well as in Vancouver, British Columbia, CANADA, should make certain they are prepared to take emergency action in the event a major quake does strike.