Beginning on February 26, NASA satellites in space began detecting staggeringly large emissions of Carbon Monoxide (CO) gas along the west coast. As evidenced by the satellite image below, the emissions were far too big, too highly concentrated and covered too vast an area to be man-made. On the satellite image below, the areas in black, purple and brownish-orange show the magnitude of the emission; it was utterly massive! 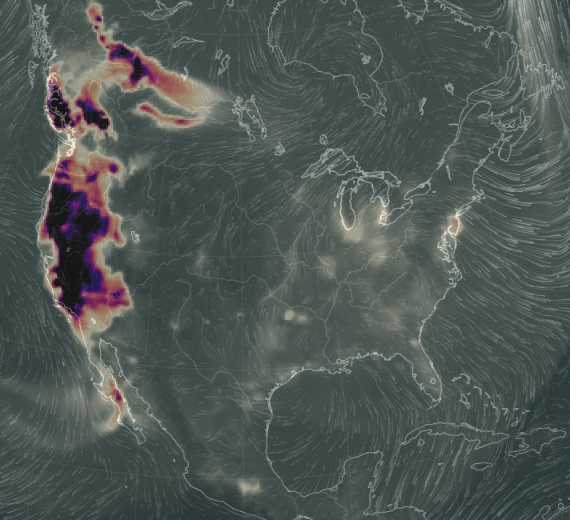 Scientists quickly determined that the CO was coming up out of the earth; being expelled out through seismic faults. What this means is the earth began moving in such a way on February 26, that pressure along the fault lines in California became so great, it expelled massive amounts of naturally-occurring carbon monoxide gas from the Monterey Formation of shale. In fact, the proximity of the CO emissions directly aligns with those formations! That’s a LOT of pressure!

When pressure builds up like this, it is not hard to understand that something has to “give” and when it does, there’s an earthquake. That’s why this emission of Carbon Monoxide is a warning sign of an impending, LARGE earthquake.

The last time an emission of Carbon Monoxide on this scale took place, was a week prior to the Gujarat Earthquake which devastated India; killing twenty thousand people and destroying 400,000 homes when the 7.6 quake struck in Jan. 2001.

After the initial emission of Carbon Monoxide on February 26 into the 27th , winds began to dissipate the Carbon Monoxide and carry it eastward, thinning it out as it traveled. Here is the satellite image from 12:00 Noon eastern US Time today (29 Feb 2016):

This easing of emissions can mean one of two things:

1) The pressure has receded and the danger is less, OR;

2) The pressure squeezed almost all the CO out and there’s simply not much left to push out; meaning the quake danger could still exist.

The simple fact is, we just don’t know which is the correct answer and we do not have the scientific knowledge to find out!

The fact that some of this CO is emanating from the Melones Fault Zone is problematic. There is no Monterey Formation there; it abuts the Sierra Nevada Mountains. So for a fault this far inland to be emitting CO while faults farther to the west (San Andreas) and south (Elsinore) are also exhibiting this same activity, gives an indication of the utterly massive amount of tectonic pressure taking place and the ENORMOUS area being affected by this tectonic stress.

If history is any indication of future activity, then, as took place in India in 2001, at some point within the next six or seven days (max) – there may be a **** MAJOR **** earthquake along one or more of these fault lines. If we doubt that such gas emissions may be related to earth quakes, and think perhaps the quake in India was a mere coincidence, bear in mind that India was not the only major quake where gas emissions took place in advance.

DO NOT PANIC — PLAN INSTEAD

The choice is completely yours as to how to use (or ignore) this information. One thing is certain: THERE IS NO NEED TO PANIC. But there may very well be a need to plan, AND PLAN FAST.

We urge you to plan, now. If the past is any indication of the future, within about six or seven days, we will all know.

You May Also Want To Look At This Article: San Andreas Fault Zone Had 3 Significant Gas “Puff Event” – California “Big One” Earthquake Watch!