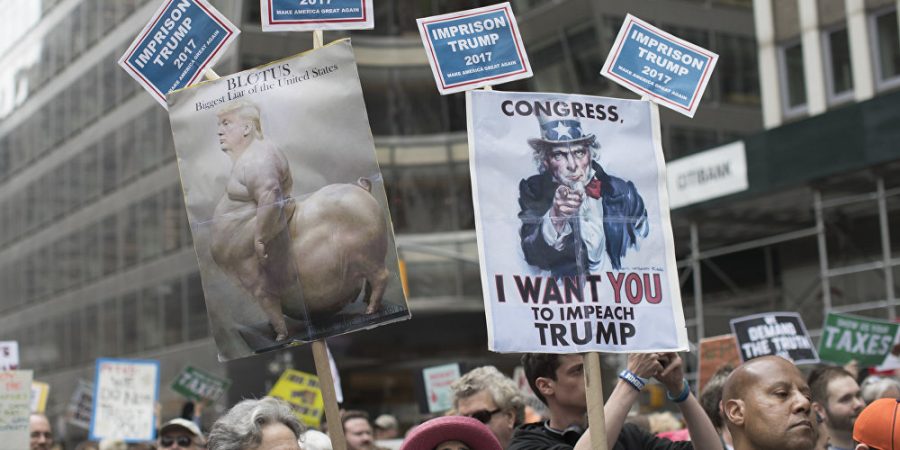 Marches Demanding Trump Release His Tax Returns Held Around the US

A national day of protest is now in progress across the US, as in over 100 cities marchers are calling on US President Donald Trump to release his tax returns.

April 15 is the US deadline for filing tax returns, and was thought by organizers of the march to be a fitting day to demand that the sitting US president follow in the footsteps of his peers and adopt a practice of financial transparency by releasing his tax returns, as every president since Nixon has done.

Organizers expected more than 10,000 to attend the Tax March in Washington, DC, and many more to gather in New York City, where crowds will pass Trump Tower, the president’s high-profile Manhattan property. Demonstrations are also underway in Chicago, Illinois; Seattle, Washington; and Philadelphia, Pennsylvania.

Meanwhile in Washington DC. This sums it up quite well. Are you listening @realDonaldTrump ? #TaxMarch pic.twitter.com/1BOaasJs1N

During the Washington event, Senator Ron Wyden (D-OR), a member of the Senate Finance Committee, stated during a fiery speech that those seeking to expose Trump’s financial backroom dealings are “taking the gloves off,” as crowds chanted in response “knock it off!”

It's packed at the Richard J. Daley Center for Chicago's #TaxMarch pic.twitter.com/WSYzW6zoxD

Wyden, along with several other Democratic senators, has introduced legislation to require that presidents, and those seeking to be nominated for the post, release their tax returns, in efforts to increase financial transparency in the US government, according to The Hill.

Protesters have been every bit as vocal as lawmakers. Attending her first march in Washington since the election of Trump, local resident and funeral home employee CJ Ingram said, “I’m really mad because he made Barack Obama produce his birth certificate and he’s not even producing his tax returns. C’mon really? What are you hiding?” according to the Washington Post.

Marches are scheduled in San Francisco and Los Angeles, as well.

In West Palm Beach, Florida, a “March-a-Lago” event is taking place near Trump’s palatial Mar-a-Lago resort, where the president is spending the weekend playing golf, his fifteenth junket since being inaugurated less than three months ago.

As reported by the Palm Beach Post, Trump’s motorcade “took a longer than usual route home from golf,” to avoid the protesters outside his gates.