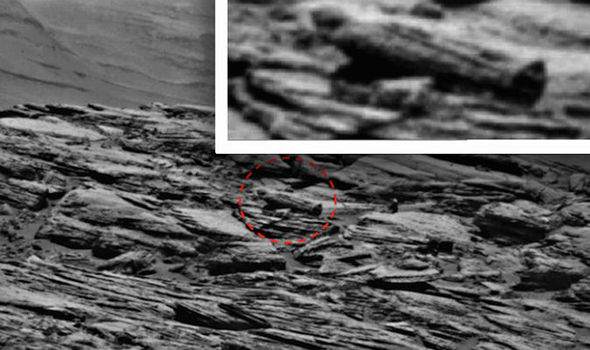 ALIEN hunters are hoping that what they claim looks like a sarcophagus on the surface of Mars is the real deal and not just an extreme optical illusion.

Images of the figure-like object have appeared on several alien websites and UFO channels with claims it could be an alien sarcophagus in an ancient burial ground or a fallen statue.

The object was found in images published by NASA after they were beamed back by the Curiosity River droid which is currently exploring the Martian surface.

In a video on the Mister Enigma YouTube channel a computer-generated narration said: “Something remarkable has been found in a Mars rover photo. 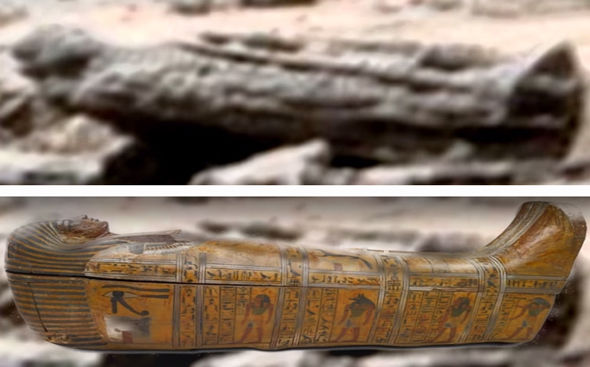 “If we zoom into this NASA image, we will see what appears to be some kind of sarcophagus laying on the edge of a cliff.

“It is awfully close to what the Egyptians used to use to encase mummies after death.”

The video also suggested there could be two faces carved into a cliff looking towards the object and questioned: “Could this be an ancient alien burial ground?”

However, Mister Enigma admits to digitally-edited the image, and other footage it shows, to “make it clearer” and has been accused by some UFOlogists and sceptics of misrepresentation – something it denies.

In this car, though, the channel accepted the object could just be an unusual optical illusion.

Pareidolia is a phenomenon when the brain tricks the eyes into seeing familiar objects or faces in textures or patterns such as clouds or a rocky surface.

The video narration added: “Or is this an extreme case of pareidolia?”

But Scott C Waring, editor of UFO Sightings Daily, who does not appear to be convinced by the whole case for pareidolia, has his money on it being a fallen statue.

He blogged: “It shows a state of a standing figure that has fallen over on its back.

“This may be a sarcophagus or some type of monument celebrating an important person in their alien history.”