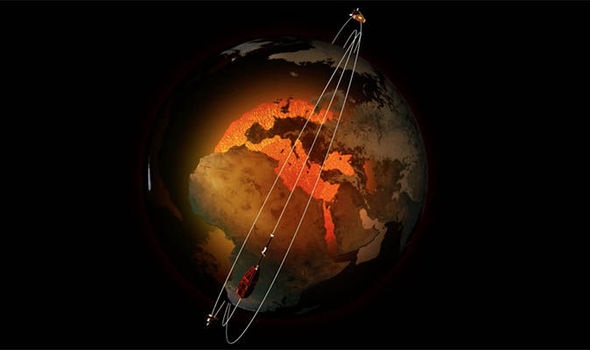 A MASSIVE lake of molten iron 1800 miles below the Earth’s surface is starting to move – threatening the collapse of the planet’s magnetic fields and potentially the end of life on Earth.

The 260 mile wide stream of iron – almost as hot as the surface of the Sun – is not just moving but speeding up.

Scientists believe the iron lake is an integral part of earth’s current magnetic field structure and the disturbance could be an indicator the magnetic poles are preparing to flip or even being destroyed altogether.

Without a magnetic field Earth would no longer be able to deflect solar winds which would then strip away our Ozone layer and leave humanity vulnerable to deadly doses of radiation.

Earth would become as dead as Mars which lost its magnetic field and atmosphere about 4 billion years ago.

This movement of the stream of molten iron currently below Russia and North America was discovered by the European Space Agency’s trio of satellites, called Swarm.

Launched in 2013 they can measure magnetic field variations as deep down as 1800 miles below Earth’s surface, where the molten core meets the solid mantle. 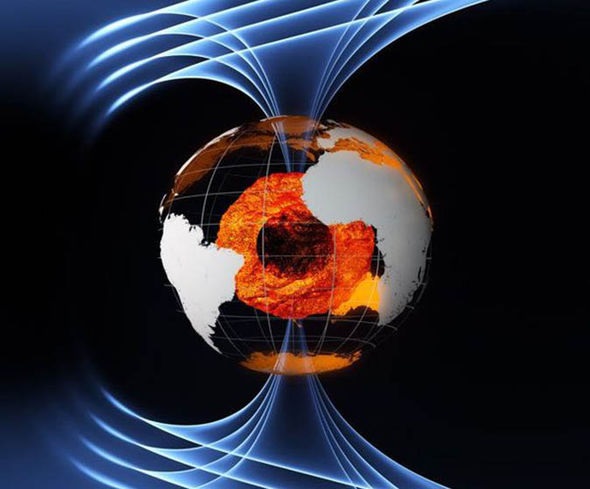 The iron lake has trebled in speed since the beginning of the century and is now circulating westwards at about 35 miles an hour heading for Europe.

Analysts believe the movement is an unstoppable natural phenomenon which may happen every billion years.

Phil Livermore of the University of Leeds, UK, who led the team said: “It’s a remarkable discovery. We’ve known that the liquid core is moving around, but our observations haven’t been sufficient until now to see this significant jet.“

Earth’s magnetic field is largely generated by the movement of molten iron in the outer core, but the moving jet of iron show massive and unusually strong ‘lobes’ of magnetic flux originating from the core-mantle boundary, situated beneath Canada and Siberia.

These ‘lobes’ move with the flow of the molten iron.

Livermore said: “As the iron moves, it drags the magnetic field with it.

“We can’t see the flow of iron itself, only the motion of the flux lobes.

Other geophysicists agree. William Brown of the British Geological Survey’s geomagnetism team said: “The more we understand the core’s behaviour at various time and spatial scales, the more we can hope to understand the beginnings, renewal and future of our magnetic field.”