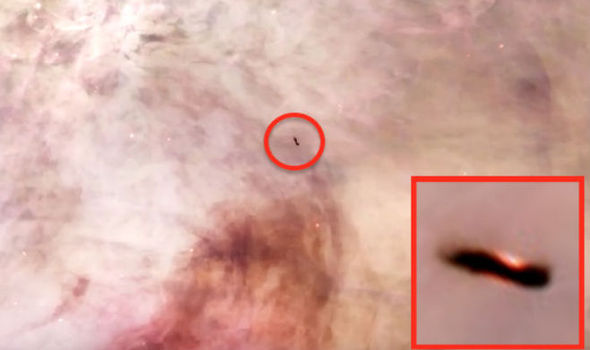 ALIEN hunters think they have found a monster-sized UFO flying through the Orion’s Nebula.

YouTube channel UFOmni2012 uploaded a video showing an image taken by the Hubble Telescope of the nebula – which is a huge cloud of gas and dust in outer space.

Within the dust cloud is an odd dark, more solid-looking object they have described as a cigar-shaped UFO.

Scott C waring, editor of ufosightingsdaily.com was amazed by the discovery.

He blogged: “This UFO was reported by UFOmni2012 of Youtube and may be one of the largest UFOs we have reported in a while.

“How big exactly? If you lined up Earth 100 times then you would have a good start.

“This is one big UFO.

“Anything seen in Nebulas are usually tremendously huge for us to see from Earth.”

One of his followers was also amazed.

He posted on the blog: “That’s Huuuuge. See the white one underneath it. Ufomni2012 always finds good stuff.”

And amateur astronomer and astrophotographer Troy Naylor said he had filmed the same object.

A user called ProtoX posted on YouTube said: “I hope they will come, and will save the earth.”

But, it appears the alien hunters got excited too soon on this occasion.

Other viewers were quick to point out what the object actually is.

Tommy posted on YouTube: “That is just a thick cloud of star-forming dust.”

David Orasanin added: “This is a solar system in the making… a process seen 100 times in documentaries.”

And Brian Andrew revealed where the image had been explained 15 years ago.

He posted on ufosightingsdaily.com: “It’s a protoplanetary disk. This photo is from 2001. It’s on page 189 of the national geographic book “Hubble imaging space and time.”

A protoplanetary disk is a rotating circumstellar disk of dense gas and dust surrounding a young newly formed star.