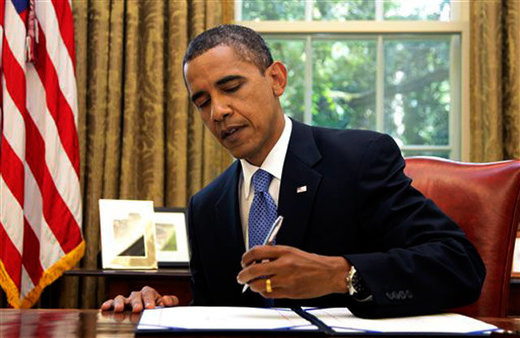 While the eyes of the world are focused intently on the 2016 presidential election, the White House has made a dramatic, potentially game-changing move that has once again almost completely eluded the mainstream media — leading many to wonder what they may be hiding.

On Friday, November 4, a new executive order was signed titled “Advancing the Global Health Security Agenda to Achieve a World Safe and Secure from Infectious Disease Threats,” giving the United States government, military and other worldwide partner organizations new powers to respond to what they deem as “biological threats” that may potentially emerge.

Usually referring to disease outbreaks or perhaps even biological weapons, the nearly 2,500-word document (which can be found on WhiteHouse.gov by clicking here) is vague about what such a plan may entail. But speculation is that it could involve some sort of major medical or vaccine-driven response — with no mention as to whether consent of the people will be included.

Describing itself as an organization of global partners, stakeholders and organizations with the goal “to advance a world safe and secure from infectious disease threats,” the Global Health Security Agenda is the central benefactor of the new executive order.

The GHSA says it was created to “bring together nations from all over the world to make new, concrete commitments, and to elevate global health security as a national leaders-level priority.”

What’s particularly interesting about this organization, about which little is known by the mainstream U.S. or even world population, is that it will have the support of the United States Department of Defense if necessary; in other words, the executive branch of the government that directs all activities related to the armed forces.

Section 1 of the order, ‘Policy,’ lays out what the focus will be for the response plan:

“As articulated in the National Strategy for Countering Biological Threats and implemented in Presidential Policy Directive 2 (PPD-2), promoting global health security is a core tenet of our national strategy for countering biological threats, the order states. “No single nation can be prepared if other nations remain unprepared to counter biological threats; therefore, it is the policy of the United States to advance the Global Health Security Agenda (GHSA),which is a multi-faceted, multi-country initiative intended to accelerate partner countries’ measurable capabilities to achieve specific targets to prevent, detect, and respond to infectious disease threats (GHSA targets), whether naturally occurring, deliberate, or accidental.”

Potentially backed by the U.S. military if necessary, the order includes support from major worldwide organizations.

“The roles, responsibilities, and activities described in this order will support the goals of the International Health Regulations (IHR) and will be conducted, as appropriate, in coordination with the World Health Organization (WHO), Food and Agriculture Organization of the United Nations (FAO), World Organisation for Animal Health (OIE), Global Partnership Against the Spread of Weapons and Materials of Mass Destruction, the International Criminal Police Organization (INTERPOL), and other relevant organizations and stakeholders.”

Even the worldwide financial institutions may have a hand in this campaign, should it be deemed necessary by those in charge, as the order continues:

“To advance the achievement of the GHSA targets and to support the implementation of the IHR within partner countries, each executive department, agency, and office (agency) shall, as appropriate, partner, consult, and coordinate with other governments, international financial institutions, international organizations, regional organizations, economic communities, and nongovernmental stakeholders, including the private sector.”

Finally here is the section on the Department of Defense and how it plans to back up the aforementioned order:

“The DOD may ‘facilitate implementation and coordination of Department of Defense programs to further the GHSA, as well as provide technical expertise to measure and evaluate progress in countries the United States has made a commitment to assist…'”
The lengthy document begins by stating on behalf of President Barack Obama, “by the authority vested in me as President by the Constitution and the laws of the United States of America, it is hereby ordered as follows,” and signed by the president himself at the end.

But with the wide-ranging scope, powers granted, and ambiguous nature of the document itself, it’s fair to wonder whether the government, or any of the aforementioned organizations themselves, will overstep their Constitutional or legal bounds at some point. Once again (thanks to yet another media blackout), it’s up to the people to spread the word and keep watch.

The only major media outlet to publish a story according to Google News was The Hufftington Post, which ran a glowingly positive op-ed by the Director of the CDC, which is a part of the executive order. It can be read here.