Man and even ancient man have been gazing at the stars even before the invention of telescopes and other visual tools. We have some ways of knows what they might have looked at but imagine how different the skies might have been a very very long time ago, plus with no light pollution it must have been an awe inspiring view for them.

Could they have passed on knowledge to us using very basic methods? 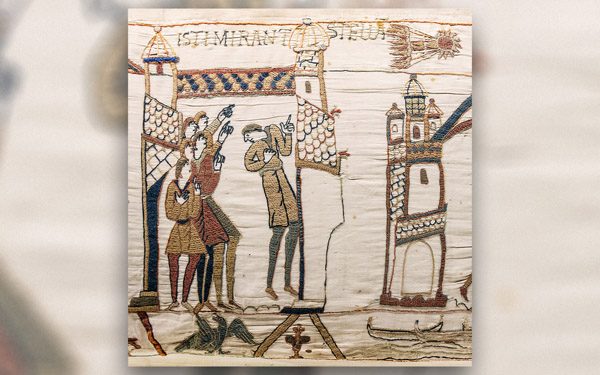 The Bayeux Tapestry features a depiction of the 1066 Halley’s Comet.
Credit: Myrabella/CC by 1.0

The far reaches of the outer solar system may be home to an icy giant — a hypothetical planet scientists have dubbed “Planet Nine.”

Meanwhile, archives back on Earth are home to dozens of medieval records documenting the passage of comets through the heavens. Now, two researchers from Queen’s University Belfast in Northern Ireland are hoping to use these old scrolls and tapestries to solve the modern astronomical mystery of Planet Nine.

“We have a wealth of historical records of comets in Old English, Old Irish, Latin and Russian which have been overlooked for a long time,” said university medievalist Marilina Cesario, one of the leaders of the project. “Early medieval people were fascinated by the heavens, as much as we are today.”

The records include dates and times, Cesario said, which makes them useful to modern-day astronomers.

Planet Nine, if it exists, would have about 10 times the mass of Earth and orbit 20 times farther from the sun than Neptune does. (Planet Nine is not Pluto, which was once considered the ninth planet but was demoted to mere “dwarf planet” in 2006. Nor is it Nibiru, the completely fictional “rogue planet” that conspiracy theorists sometimes claim is about to destroy the Earth.)

Scientists suspect the existence of Planet Nine because it would explain some of the gravitational forces at play in the Kuiper Belt, a stretch of icy bodies beyond Neptune. But no one has been able to detect the planet yet, though astronomers are scanning the skies for it with tools such as the Subaru Telescope on Hawaii’s Mauna Kea volcano.

Medieval records could provide another tool, said Pedro Lacerda, a Queen’s University astronomer and the other leader of the project.

“We can take the orbits of comets currently known and use a computer to calculate the times when those comets would be visible in the skies during the Middle Ages,” Lacerda told Live Science. “The precise times depend on whether our computer simulations include Planet Nine. So, in simple terms, we can use the medieval comet sightings to check which computer simulations work best: the ones that include Planet Nine or the ones that do not.”

The two researchers come from vastly different academic fields, but they had overlapping interests, Lacerda said: Lacerda is an astronomer interested in the humanities, and Cesario is a medievalist interested in astronomy. The two began working together after the United Kingdom’s Leverhulme Trust called for scientists to apply for grants to fund projects that combine the arts and the sciences.

As part of the project, the researchers and their colleagues have put together an exhibition at the Ulster Museum in Belfast called “Marvelling at the skies: Comets Through the Eyes of the Anglo-Saxons,” which combines modern astronomy images with depictions from the Dark Ages, including a report of the 1066 appearance of Halley’s Comet, which is enshrined in the famous Bayeux Tapestry.

The Anglo-Saxons of the Dark Ages, or early Middle Ages, called comets “feaxeda” or “long-haired stars,” according to the Ulster Museum. The exhibit opened May 2 and will run through June 3.

From a historian’s perspective, the exhibit and research project will help reveal how medieval people viewed comets, Cesario said. The objects weren’t seen just as signs from God, even in the allegedly unscientific Dark Ages, she said. Medieval Anglo-Saxons “demonstrate a genuine interest in astronomy and an attempt to rationalize and systematize the world around them,” Cesario told Live Science.

And that attempt at systematization may pay off, much further in the future than medieval observers of the heavens likely imagined.

“It is fantastic to be able to use data about 1,000 years old to investigate a current theory,” Lacerda said.