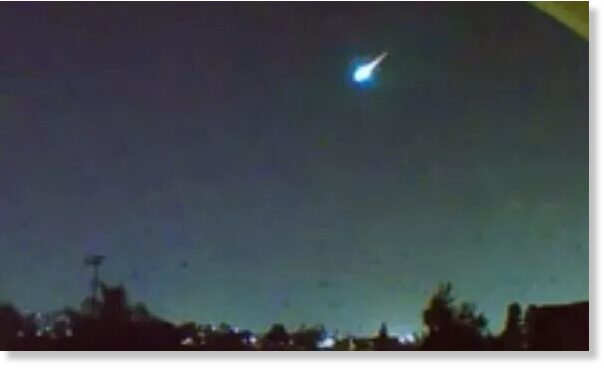 A huge meteor streaked in the skies above California, leaving onlookers stunned with one claiming it was “a close call”.

Residents of California were stunned when a bright fireball boomed above them, producing stunning green colours. The meteor hit Earth’s atmosphere on Sunday, September 6, above California, with dozens reporting the sighting.

Some Californians claimed it to be the best meteor sighting they had ever seen, while others were stunned by how close it seemingly came to ground.

Almost 50 people reported the sighting to the International Meteor Organisation (IMO), with one video from a security camera showing the fireball in all its detail.

Robert told the IMO: “This one was huge. Never seen anything like it. I just happened to look up while sleeping on my balcony as saw this giant fireball fly by.

Megan said: “I’ve never seen a colour that vivid in my life.

Mike said: “That was a close call that no one caught!”

Donna added: “It was a slightly orange around the outside of the ball while dark green with a green tail.

“I’ve never seen something so big or anything like this in my life time! It was beautiful!”

Asteroids and meteors create a bright explosion when they hit the atmosphere of Earth as the space rocks have never encountered air resistance before.

As air seeps into the pores and cracks of the rock, it pushes it apart and causes it to explode.

The IMO said: “Fireballs are meteors that appear brighter than normal.

“Due to the velocity at which they strike the Earth’s atmosphere, fragments larger than one millimetre have the capability to produce a bright flash as they streak through the heavens above.

“These bright meteors are what we call fireballs and they often strike fear and awe for those who witness them.”

Each year, the Earth is hit by more than 6,000 meteorites on average, most of which break up in the atmosphere as soon as they hit.

However, in some cases, they can almost make ground, causing widespread damage in the process, such as the Chelyabinsk meteor.

In 2013, a 20-metre meteor exploded over Chelyabinsk, Russia, smashing windows and caused injuries to more than 1,000 people.

Another such incident also came in Russia in 1908 when a small asteroid exploded over Siberia’s Tunguska which ruined woodlands across 800 miles after it went undetected by experts.