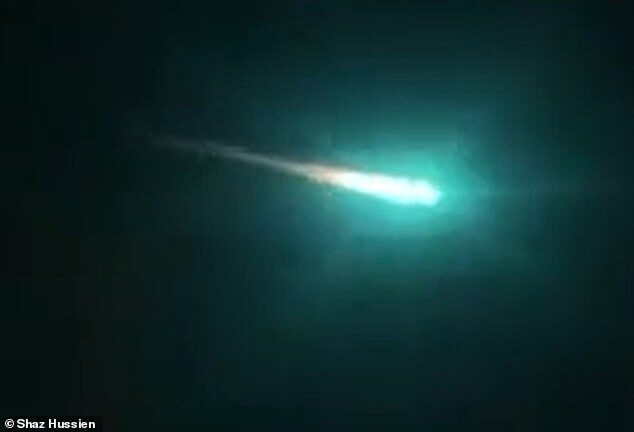 Pilbara residents have been treated to an astronomical spectacle overnight after a green fireball lit up the night sky.

The meteor was spotted at 12.46am on Monday morning and was caught on camera by shocked onlookers — including the Karratha Police — in Port Hedland and Cape Preston, near Karratha.

Matt Woods from the Perth Observatory said the green colour was the result of magnesium from the rock burning up as it entered the atmosphere.

It was likely no bigger than a pebble and was probably travelling between 16-50km per second.

“So that’s like going from the Perth Hills to the CBD in a second,” Mr Woods said.

“It is freezing and as it hits the atmosphere it warms up and so the outer layers melt.

“It’s like rubbing your hands together, it is due to friction and that is where you get the brightness and colour from.”

Mr Woods said that from looking at the video it appeared that the meteor burned up before it hit the earth.

FIFO worker Miller Frunks, who caught the spectacular event on camera, said he and a co-worker were driving to a job in Port Hedland when they spotted the green flame shooting across the sky.

“It shocked us all at first, because none of us had ever seen something like that!”

“So we pulled over and after some frantic searching for our phones started recording. I was unsure of what it was at first, but the running joke was ‘aliens’. After a bit of processing, sharing the video and discussing what happened with some other co-workers, we knew it must have been a meteor!

“All of us were absolutely blown away by the brightness and the colour.”

Karratha Police were also lucky enough to get a box seat to the space stunner while out on burglary patrols.