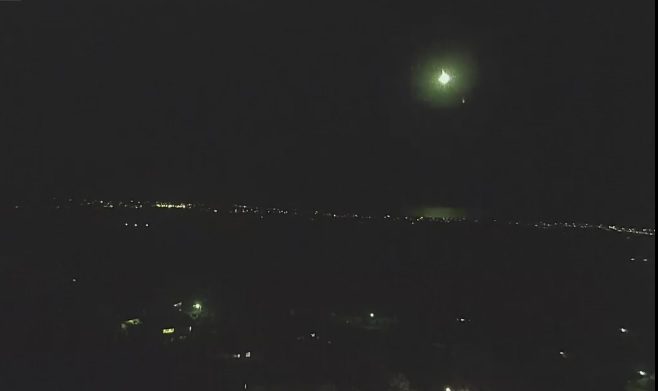 Some Queenslanders are counting their lucky stars after catching a glimpse of what’s believed to be a bright meteor.

Tim Sayre and his wife were two skygazers left in awe when the night sky lit up above their car about 6.40pm on Monday.

They captured the shooting star on dashcam on McCarthy Road, in Bundaberg.

“Given meteors are travelling at 11 kilometres every second (and often considerably faster), and that they start burning up at 100km altitude, this meteor may be hundreds of kilometres away from where the footage was taken,” Brown said.

“With the improving quality of dashcams, CCTV and mobile phones, we are getting a lot more footage of bright meteors than we did in the past.”

Fortunately for the couple, the conditions were perfect for stargazing.

“There was no moon out and no clouds so the stars were really clear. The flash was almost right in front of us and really easy to see,” Sayre said.

“It was a nice feeling to witness something like this.”

He said about two hours later a second smaller star appeared briefly – but this time he didn’t have a camera.

According to Brown, most meteors spotted before midnight can be fairly unpredictable.

“There are some more predictable meteor showers (and rarer meteor storms) when the Earth passes through the orbits of comets, but those are usually peak in the pre-dawn hours,” he explained.