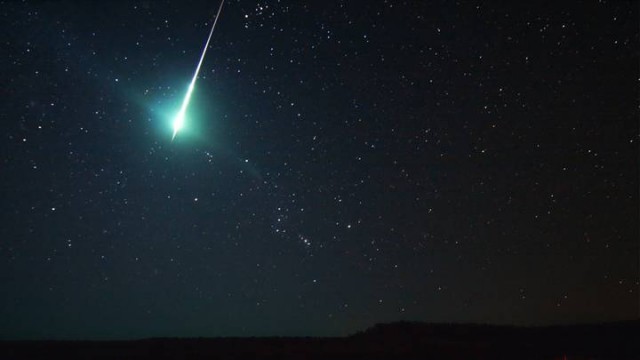 There was also such an event back in 2016, you can read about that past event here: Meteor Fireball Sightings Reported Across Virginia

Fredericksburg-area residents reported that an object from outer space tore through the sky Tuesday, just before midnight, leaving in its wake a sonic boom heard by residents from Culpeper to Colonial Beach.

The meteor was “the brightest and most amazing fireball I’ve ever seen, in person or in any videos,” wrote Chase K. of Dahlgren in his report to the American Meteor Society. The night sky appeared like a giant lightning strike and it was almost as bright as daylight when the primarily red and orange fireball was seen, he said.

He didn’t notice any sound, but an observer who identified himself as William G. of Colonial Beach wrote in his report to the society that there was a loud boom and “ground shake similar to a military artillery round.”

Before readers remind us that we’re surrounded by military bases, those in the vicinity of the reports say Tuesday night was business as usual. Fort A.P. Hill has issued an aviation noise alert through Friday for low-flying aircraft training, but nothing from the Army post was in the air at the time in question, said Michael Meisberger, public affairs specialist.

He said the next statement in hushed tones.

“From what I understand, it may have been a meteor,” he said. “I can’t tell you if it’s real or if it was somebody’s imagination, [but] that’s what I heard.”

Operators in the 911 center in King George County felt the earth move and got lots of calls from residents who said the same, said Sheriff Steve Dempsey. There were no reports of explosions, fires or other disasters that might cause that kind of noise.

“Everybody felt it, but had no idea where it came from,” Dempsey said.

Facebook posts were filled with descriptions and possible answers, ranging from alien invasions to thunderclaps.

Alyssa Anne Halderman posted that she “heard a loud boom here in Caroline Pines [in Caroline County] and the house shook.”

Dan Dunmire heard it in Fredericksburg, and the noise scared Mandie Hartford in King George, who immediately checked the baby monitor to see if the noise had awakened her twins.

Michele Spears thought she had imagined it.

“I felt whatever it was and there seemed to be a faint rumble,” the King George woman posted on the King George – Westmoreland General Forum page. “My dog and I just stared at each other, waiting for more, but nothing happened, so I chalked it up to thunder and went to sleep.”

Mike Hankey, operations manager for the American Meteor Society, said he received 10 reports from residents in North Carolina and Virginia about the fireball. Two reported sounds with their sighting, and two saw meteor fragments.

“Occasionally large fireball meteors can produce sonic booms and rumbling sounds,” Hankey wrote in an email. “Often times this means the object penetrated deep enough into the atmosphere to survive and possibly leave meteorites, but not always.”

Several thousand meteors of fireball magnitude burst through the Earth’s atmosphere every day, according to the Meteor Society website, but simply aren’t seen.

Most take place over oceans or uninhabited regions, and many are masked by daylight. Those that happen at night have smaller chances of being seen because there aren’t people out looking for them.

“They’re not uncommon,” said David Abbou, a Stafford County resident and member of the Rappahannock Astronomy Club who writes an astronomy column for the newspaper.

In 1992, he was living in Dale City when he saw a bright light flashing from the window. It was a clear night, so he knew it wasn’t lightning.

News reports confirmed his assumption that it was a fireball meteor. Because it was a pleasant Friday evening, lots of people were out and saw it, he said.

“The coolest part was it landed on an unoccupied car in Peekskill, N.Y.,” he said.

The car’s owner might have had a different opinion on that meteor matter.