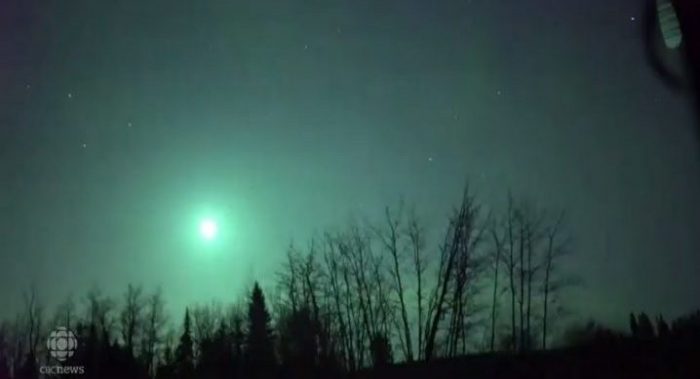 Paul Smith was nodding off in his vehicle at 2 a.m. on March 19 while watching and taking photos of the aurora borealis when he awoke to a bright light.

The 39-year-old thought he was dreaming — but he was able to grab his camera and point it in the right direction.

“I was kind of tired, so what surprised me was that I had the wherewithal to kind of think to turn it on,” Smith said Friday.

What he captured on video at his spot near Anzac, Alta. was what Smith thinks was a meteor.

“The biggest, brightest thing I’ve ever seen,” he said.

In the video, the fireball can be seen moving through the sky, bright green in colour, before flashing bright white and orange in succession before flaming out. Smith said he could hear a bang while it flamed out.

He shared his experience with some Facebook groups of local aurora borealis watchers. Other people confirmed they saw the fireball too. He then posted a video to his photography page on Facebook.

One person who worked at a nearby camp told Smith she thought there was an explosion in the camp. Another told him the flash was so bright it looked like someone flashed high beams on their vehicle.

Smith also received messages from people from across the Atlantic.

A man with an amateur sky-watching group in the U.K., sent Smith an email asking for more details about what he saw.

Iain Grant wrote that about 20 minutes after Smith saw the fireball, his group also detected some unusual activity on their radar.

“We had a very large radar detection here in England, of a strength not often seen,” Grant wrote in an email to Smith.

While they are unable to confirm that the two events are related, both were extraordinary, Smith said.

Smith has both a knack and desire for catching extraordinary events on his camera. He shoots the aurora borealis frequently and has also caught the rare sprite lightning.

Capturing these rare moments inspires Smith to keep up the chase.

“It’s just a matter of having the right equipment, pointed in the right place at the right time,” Smith said. “It’s a big hobby/obsession of mine, for sure.”