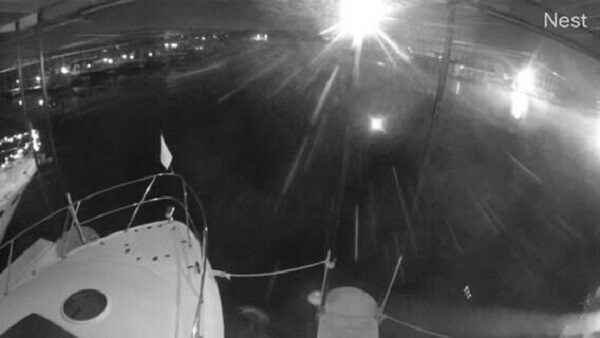 By Tena Lee
via Hendersonville Standard

Kevin Fisher was sitting out by a fire in his backyard on the Walton Ferry peninsula late Saturday when he saw a flash of light followed by a sonorous boom.

Like many, Fisher turned to social media for a quick explanation.

And everyone, it seemed, had a theory – from a blown transformer to fireworks or gunshots to an explosion at the DuPont chemical plant to blasting at a rock quarry in Old Hickory.

Hendersonville Fire Chief Scotty Bush said he heard what sounded like a transformer blow from his living room on the Indian Lake peninsula.

At least two engine companies were dispatched to check out the sound after receiving a few 911 calls, according to Bush.

“Nothing was found that I’m aware of,” he said.

A spokesperson for Hoover Materials, the rock quarry in Old Hickory just across Old Hickory Lake from Hendersonville, said they didn’t blast on Saturday night.

“By law we’re not allowed to blast after sunset,” she said.

Nashville International Airport Spokesperson Kym Gerlock said there wasn’t any activity at the airport that would have caused the loud noise.

The National Weather Service noticed many of the same comments on social media, according to meteorologist Larry Vannozzi.

Vannozzi noted that skies were clear, the temperature was about 37 degrees and no thunderstorms were noted anywhere near Tennessee or Kentucky.

“The only thing I can confidently say is that it was not weather-related,” said Vannozzi.

By Sunday, Hendersonville resident Bryan Hill seemed to have solved the mystery.

Hill caught both a streak of light and a loud boom on Nest cameras at both his home and at Blue Turtle Bay marina where he keeps his boat, at 10:51 p.m.

“In the camera at the marina you can see the sky light up a few seconds before the sound reaches the marina,” wrote Hill, who posted the video in a couple of Facebook groups.

Hill believes the flash and loud noise were caused by a meteor entering the earth’s atmosphere.

His theory is a likely one, according to the American Meteor Society, a New York-based not-for-profit organization dedicated to promoting the meteoric astronomy research of both amateurs and professionals.

A fireball, or meteor, was reported over Tennessee on Sunday, Dec. 6 at around 4:51 UTI, or 10:51 p.m. Central time, according to the AMS. The meteor was spotted in Nashville and was accompanied by sound, according to tracking information on the AMS’ website.

Local amateur astronomer Theo Wellington says that meteors, or falling stars, are not that uncommon to see on a cloudless, dark night.

However, meteors big enough to really light up the sky and make a noise are relatively rare and are often seen for large distances, she added.

“Booms are less common and are generally heard over a somewhat wide area,” Wellington noted. “It’s basically a sonic boom – the sound is the meteor entering the atmosphere.”

Wellington said that most meteors are the size of a grain of sand, but one large enough to enter the atmosphere may have been the size of a fist.

It’s rare to find a meteorite – a meteor that hits the earth – Wellington added because they are so small and are often indistinguishable from regular rocks.

Wellington said the best time to view meteor showers is this weekend.

“The peak of one of our better meteor showers, the Geminids, comes next weekend,” she said.

“So we’ll have an elevated number of meteors for the next week, with moonless nights for good watching.”

For more information about meteors or to report a sighting, go to the American Meteor Society’s webpage at www.ams.org.