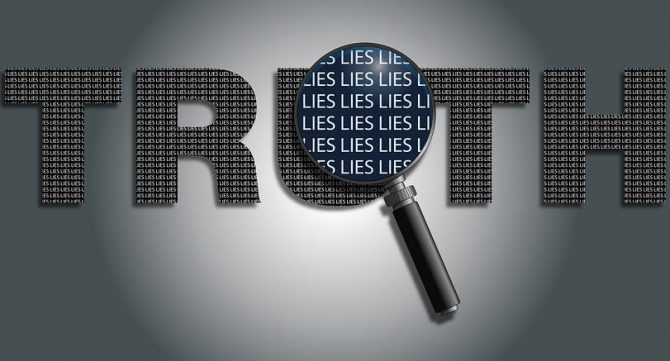 What would you think or say if I were to tell you black is white; up is down; Planet Earth is square, not spheroid in shape; and night is day? You probably would say I’m off my rocker and really don’t know what I’m talking about. Do you think that some segments of vested scientific research are capable of being equally outrageous?

I propose that very sort of scientific mischief and outrageousness is going on within vested-interest microwave technology sciences so as to keep you, the gullible and enthralled technology ‘smart’ device consumer, confused into believing there are no adverse health effects from microwaves EXCEPT what’s acknowledged and called thermal radiation, which can heat skin.

If smart technology gadgets don’t heat your skin, then they are safe, which is the standard “tobacco science” pap disseminated by industrial professional societies such as IEEE, the American National Standards Institute (ANSI), the National Council of Radiation Protection (NCRP) and the International Commission on Non-Ionizing Radiation Protection (ICNIRP), who fund and/or perform the studies the World Health Organization and global government health agencies cite as ‘factual’ science.

Basically, microwave technology industrial professional societies state emphatically there is no such effect as non-thermal radiation adverse health effects, which contribute to and/or cause electromagnetic hypersensitivity (EHS) or what physicians call idiopathic environmental intolerance (IEI) in sensitive people around the world.

However, here’s the unbelievable part: Non-Industry vs. Industry Funded Studies.

NON-Industry studies found 70% HARMFUL effects and 30% found no effects; whereas in INDUSTRY-studies, they found only 32% HARMFUL effects with 68% no effects. Those data were compiled by Dr. Henry Lai, University of Washington[1], Professor Emeritus—Department of Bioengineering. Dr. Lai’s work included the “biological effects of non-ionizing electromagnetic fields (from extremely-low frequency to radiofrequency) and their possible medical applications. Furthermore, Dr. Lai’s work included the development of Artemisinins (derived from extracts of sweet wormwood) for cancer treatment. [2]

Here’s the truly ironic ‘scientific’ part about the above: Almost one-third (32%) of Industry studies found harmful health effects! How, then, can the microwave industry summarily deny such effects don’t exist plus cavalierly – and deliberately – mislead gullible but adoring technology-crazed consumers?

Even the U.S. Federal Communications Commission is hoodwinked!

The FCC does not have the expertise or the capabilities to determine the safety of electromagnetic fields. FCC stated “Because the Commission does not claim expertise as a de facto health agency, it necessarily considers the views of federal health and safety agencies and institutes that continue to address RF exposure issues in formulating such judgments” in the Federal Register Vol. 78, No. 107 / Tuesday, June 4, 2013 / Proposed Rules[3]. Basically, the FCC takes no responsibility for the science. There ought to be a law against that type of obfuscation on the part of a federal agency tasked with setting safety standards.

Starkey describes “incorrect and misleading statements from within the [AGNIR 2016] report, omissions and conflict of interests, which make it unsuitable for health risk assessment. The executive summary and overall conclusions did not accurately reflect the scientific evidence available. Independence is needed from the International Commission of Non-Ionizing Radiation (ICNIRP), the group that set the exposure guidelines being assessed.”[4]

In the Introduction, Starkey states:

The latest AGNIR review has also been relied upon by health protection agencies around the world, including the Australian Radiation Protection and Nuclear Safety Agency and Health Canada.

Under Conflicts of interest, Starkey points out:

At the time of writing the report, the chairman of AGNIR was also chair of the ICNIRP standing committee on epidemiology. Currently, six members of AGNIR and three members of PHE [Public Health England] or its parent organisation, the Department of Health (DH), are or have been part of ICNIRP.” [….] “How can AGNIR report that the scientific literature contains evidence of harmful effects below the current guidelines when several of them are responsible for those guidelines? PHE provide the official advice on the safety of wireless signals within the UK, but having members in ICNIRP introduces a conflict of interest which could prevent them from acknowledging adverse effects below ICNIRP guidelines. (Pp. 493-94)

(a) Studies were omitted, included in other sections but without any conclusions, or conclusions left out; (b) evidence was dismissed and ignored in conclusions; (c) there were incorrect statements. Terms such as ‘convincing’ or ‘consistent’ were used to imply that there was no evidence. (Pg. 494)

Under “Studies omitted, included in other sections but without any conclusions, or conclusions left out” and referring to ROS [reactive oxygen species]:

By only including a few of the available studies, not referring to many scattered throughout the report and not mentioning ROS or oxidative stress in any conclusions or the executive summary, this important area of research was misrepresented. Oxidative stress is a toxic state which can lead to cellular DNA, RNA, protein or lipid damage (7,8) is a major cause of cancer (7), as well as being implicated in many reproductive, central nervous system, cardiovascular, immune and metabolic disorders. (Pg. 495)

However and here’s the BIG however, “ICNIRP only accept thermal effects of RF fields and focus on average energy absorbed,” (Pg. 495) even though 32% of Industry studies found non-thermal effects!

ICNIRP has stated its members are independent of vested and commercial interests. However, several ICNIRP members, e.g., Dr. Alexander Lerchl, have been accused of conflicts of interests, the most famous being Anders Ahlborn, Professor of Epidemiology at the Karolinska Institute and former consultant to the tobacco industry. Professor Ahlborn was forced to resign as a member of the WHO’s IARC working group on radiofrequencies[5]. Ahlborn was ‘outed’ that he was the director of the consulting firm Gunnar Ahlborn AB, founded by his brother. That consulting firm served telecom businesses and industry.

Starkey goes on to say:

Many of the longer-term observational studies described significant associations of RF exposures with symptoms, albeit with limitations in study designs: ‘while some, though by no means all, of the studies reviewed above appear to suggest an association between mobile phone use and symptoms…’, [page 245 (2)] followed by ‘almost all of the studies share a fundamental methodological problem which makes it difficult to draw any firm conclusions from them: these studies relied upon the participants’ own descriptions of their mobile phone usage as the exposure variable for their analysis and on self-description of symptoms while knowing exposure status'(2). Longer-term studies on symptoms were omitted from the executive summary. (Pg. 496)

No mention was made of the World Health Organization (WHO) International Agency for Research on Cancer (IARC) classification of RF fields as a possible human carcinogen in 2011, which was based on limited evidence supporting carcinogenicity below ICNIRP guideline values.(32) (Pg. 496)

By the end of the report, the conclusions on cellular studies had incorrectly become ‘There are now several hundred studies in the published literature that have looked for effects on isolated cells or their components when exposed to RF fields. None has provided robust evidence for and effect.’ [page 318 (2) (Pg. 497)

The microwave industry considers “cancer” a four-letter-word and does everything within its financial and political prowess to disassociate anyone from proving or even associating cancer etiologies with microwave EMFs/RFs/ELFs, thermal and non-thermal wave radiation.

The denial of the existence of adverse effects of RF fields below ICNIRP guidelines in the AGNIR report conclusions is not supported by the scientific evidence. [….]

The involvement of ICNIRP scientists in the misleading report calls into question the basis and validity of the international exposure guidelines. To protect public health, we need accurate official assessments of whether there are adverse effects of RF signals below current international ICNIRP guidelines, independent of the group who set the guidelines.

The anticipated WHO Environmental Health Criteria Monograph on Radiofrequency Fields, due in 2017, is being prepared by a core group and additional experts with 50% of those named, being, or having been, members of AGNIR or ICNIRP. (Table2) [….]

Independence from ICNIRP is necessary to remove the conflict of interest when effects below ICNIRP exposure guidelines are being assessed. [….]

Individuals and organisations who/that have made decisions about the often compulsory exposures of others to wireless RF communication signals may be unaware of the physical harm that they may have caused, and may still be causing, because they have not been accurately informed of the risks.” [….] “To prevent further possible harm, restrictions on exposures are required, particularly for children, pregnant women and individuals with medical conditions. (Pg. 499)

PHE and AGNIR had a responsibility to provide accurate information about the safety of RF fields. Unfortunately, the report suffered from an incorrect and misleading executive summary and overall conclusions, inaccurate statements, omissions and conflict of interest. Public health and the well-being of other species in the natural world cannot be protected when evidence of harm, no matter how inconvenient, is covered up.” (Pp. 499- 500)

Ironically, the above-cited Starkey paper has 99 References, some of which were included to show corrupted science articles which appear in the published scientific literature. [CJF emphasis added]

The above paper by Sarah J. Starkey is only one intelligently explained example of what’s really going on with microwave ‘science’ to keep consumers enthralled about and with ‘smart’ devices and denied microwave technology health hazards.

There are so many more studies I can cite, but I think readers ought to be getting the picture of what’s not being told to them so that the marketing plans for smart appliances and gadgets can rule consumers’ lives—everything from a ‘smart’ phone, appliances and Wi-Fi to the coveted G5, global Wi-Fi in the sky. Fried brains, anyone?

Catherine J Frompovich (website) is a retired natural nutritionist who earned advanced degrees in Nutrition and Holistic Health Sciences, Certification in Orthomolecular Theory and Practice plus Paralegal Studies. Her work has been published in national and airline magazines since the early 1980s. Catherine authored numerous books on health issues along with co-authoring papers and monographs with physicians, nurses, and holistic healthcare professionals. She has been a consumer healthcare researcher 35 years and counting.

Her 2012 book A Cancer Answer, Holistic BREAST Cancer Management, A Guide to Effective & Non-Toxic Treatments, is available on Amazon.com and as a Kindle eBook.

Two of Catherine’s more recent books on Amazon.com are Our Chemical Lives And The Hijacking Of Our DNA, A Probe Into What’s Probably Making Us Sick (2009) and Lord, How Can I Make It Through Grieving My Loss, An Inspirational Guide Through the Grieving Process (2008)