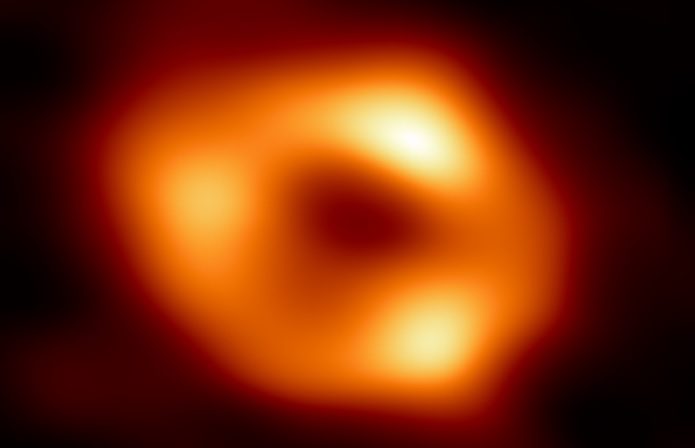 “The actual black hole itself cannot be seen because nothing – not even light – can escape it, however what can be seen is the cloud of super-heated gas swirling around it.”

Astronomers have captured the first ever image of the supermassive black hole at the center of our galaxy.

The image might look like an unremarkable orange blob, but it is in fact a direct capture of the chaotic heart of our Milky Way galaxy – a supermassive black hole known as Sagittarius A*.

This object is enormous almost beyond comprehension – measuring 40 million miles across and with a mass equivalent to that of four million suns.

The actual black hole itself cannot be seen because nothing – not even light – can escape it, however what can be seen is the cloud of super-heated gas swirling around it.

The image comes courtesy of the Event Horizon Telescope (EHT) project which previously produced the first ever image of a black hole back in 2019.

“The Milky Way’s black hole was our main target, it’s our closest supermassive black hole and it’s the reason we set out to do this thing in the first place,” said astrophysicist Prof Sera Markoff.

“It’s been a 100-year search for these things and so, scientifically, it’s a huge deal.”

The achievement proves once and for all that there really is a supermassive black hole at the center of our galaxy and opens up new opportunities for study and research.

“I’m personally happy about the fact it really drills home the fact that there is definitely a black hole at the center of our galaxy,” said Dr Ziri Younsi from University College London.

“It’s a turbulent, chaotic and quite violent environment. It made me think: ‘Wow, we’re quite lucky to live at the edge of the galaxy actually.'”