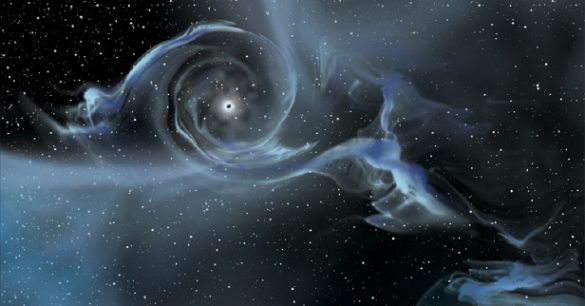 Miniature Black Holes May Be Hitting Earth Once Every 1,000 Years

First, the good news: You have not been killed by a black hole.

The bad news is that it’s possible the universe is teeming with microscopic black holes that formed at the dawn of time, all of them hurtling through space like cosmic bullets.

Some could weigh nearly as much as Earth’s moon, others an asteroid, and still more somewhere in between. Whatever their weight, most would be smaller than the period in this sentence.

If this sounds like science fiction, it could be. But perhaps not.

Astrophysicists are running out of options to explain what most of the stuff in the universe is made of. They know roughly 80% of it is dark matter, which exerts a gravitational pull on the other 20% — “normal” matter — yet has remained invisible to experiments for more than 80 years.

Devices in space and underground have sought out particles of dark matter for years, but have so far turned up empty.

Which is why researchers are turning to the (somewhat frightening) notion that we’re surrounded by countless black holes that formed 13.8 billion years ago.

“On the dark matter particle side of the spectrum, the range of possibilities is narrowing down quickly,” Alexander Kashlinsky, a cosmologist at NASA, previously told Business Insider. “If nothing is found there, and nothing is found in the black hole theater, then we may be in a crisis of science.”

The hope and havoc of mini black holes

To be clear, physicists aren’t betting a lot chips on the existence of infinitesimal black holes.

As we’ve previously reported on Business Insider, the leading hunch is that dark matter particles do exist; it’s just that this search has proven more difficult than anticipated.

And those scientists who are seeking out ancient black holes, including Kashlinsky, think they’re pretty heavy — perhaps between 20 and 100 times the mass of the sun. That idea even got a boost after the recent and groundbreaking discovery of gravitational waves, which two black holes of unusual size (30 solar masses) triggered when they collided.

Yet an unpublished research on “primordial” black holes — those formed in the hot particle soup of the Big Bang, not by collapsing stars — suggests ones that are very small in diameter could exist in droves.

If these mini-black holes are real, Kashlinsky says the heaviest of them would weigh less than the moon, yet would be shrunken down to about 0.25 millimeter in diameter, or about the width of a human hair.

Timothy Brandt, an astrophysicist at the Institute for Advanced Study, said the very lightest, asteroid-size holes would have an apparent size of less than an atom.

The reason is because black holes are so dense. In fact, beyond a certain point, pretty much any bit of matter in the universe squeezed tightly enough will collapse beyond a gravitational point-of-no-return.

That boundary is spherical and called an event horizon, and beyond it not even photons of light — the fastest things in the universe — can escape if they fall in.

Any black holes smaller than an asteroid probably evaporated long ago due to Hawking radiation, a fantastical consequence of the laws of nature that Stephen Hawking deduced in 1974.

So what if tiny black holes are out there — how often would they swing by, and what might they do?

“Asteroid-mass black holes, if they were all of the dark matter, might pass through the Earth once a millennium or so, but would be very, very hard to detect,” Brandt told Business Insider. “If you had somebody right there, they might be able to observe one.”

Brandt was skeptical asteroid-size black holes would be all that dangerous, though.

And if a heavier, sub-moon-size black hole came too close?

“We certainly would notice if one passed near the Earth, since it would affect the orbits of all of our satellites,” he wrote in an email. “I imagine that it would mess up GPS for example.”

The good news here, says Brandt, is that mini-black holes of this size would pass between Earth and the sun once every 100 million years or so.

“We would, on average, have to wait much longer than the age of the Universe for one to pass through the Earth. Though such an event is absurdly unlikely … It would cause some havoc,” he wrote.

That could definitely kill someone, Brandt noted, since it would be “a bit like a bullet, but with the damage being done by tidal forces deforming the object and generating intense heat.”

Yet the scariest scenario — at least to scientists like Brandt and Kashlinsky — is what super-tiny, essentially impossible-to-detect black holes would mean for science.

“It’s possible there is no interaction of dark matter [with normal matter] except through gravity,” Brandt said. “If that’s the case, we’re in trouble. We’ve never come to that point where we know something is out there but is completely invisible to our experiments.”