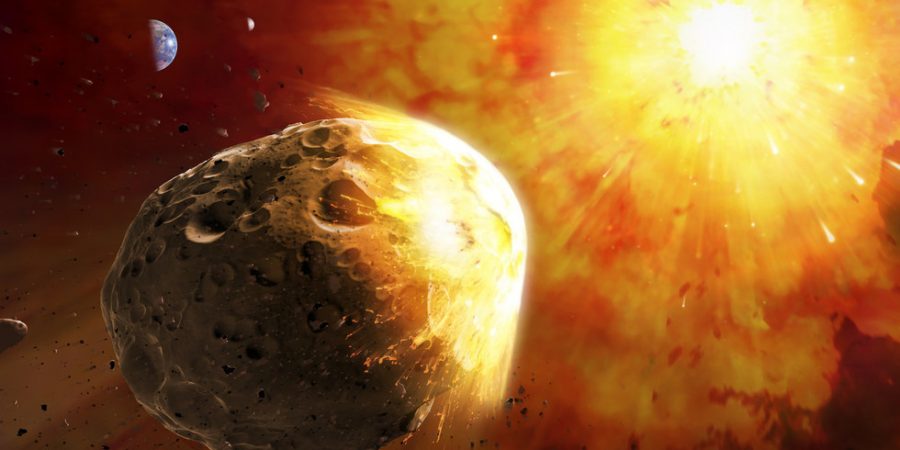 Whether it was the Big Bang, Midas or God himself, we don’t really need to unlock the mystery of the origins of gold when we’ve already identified an asteroid worth $700 quintillion in precious heavy metals.

If anything launches this metals mining space race, it will be this asteroid–Psyche 16, taking up residence between Mars and Jupiter and carrying around enough heavy metals to net every single person on the planet close to a trillion dollars.

The massive quantities of gold, iron and nickel contained in this asteroid are mind-blowing. The discovery has been made. Now, it’s a question of proving it up.

Of course, says veteran miner Scott Moore, CEO of EuroSun Mining “The ‘Titans of Gold’ now control hundreds of the best-producing properties around the world, but the 4-5 million ounces of gold they bring to the market every year pales in comparison to the conquests available in space.”

In the decades to come, if you want to be a gold titan, you’ll have to get your feet off the ground. The real titans will be far from Earth.

Moore should know: He heads up a junior mining company that is seeking a seat at the titan table with the biggest in-development gold mine in Europe.

Can we actually extract this space gold? That is the quintillion-dollar question, certainly.

Speaking to Outerplaces, Professor John Zarnecki, president of the Royal Astronomical Society, estimates that it would take around 25 years to get ‘proof of concept’, and 50 years to start commercial production.

Of course, it all depends on two key things: Economic feasibility and our advancement of space technology.

And then, we’re not alone, either. There are other world powers who would like to get their hands on that asteroid, as well. China definitively plans to dominate this race.

Mitch Hunter-Scullion, founder of the UK-based Asteroid Mining Company, tells the BBC that this is definitively the next industry “boom”.

“Once you set up the infrastructure then the possibilities are almost infinite,” he said. “There’s an astronomical amount of money to be made by those bold enough to rise to the challenge of the asteroid rush.”

EuroSun’s Moore agrees: “What we’re doing on the ground now may be impressive, but like everything else, even gold exploration in space is only a matter of infrastructure. We’ll get to it, eventually.”

But it’s not just about the quintillion-dollar prospects of the Asteroid Belt, which is 750 million kilometers from Earth.

This may be the Holy Grail of space exploration for gold, but it won’t be the first stop on this adventure,” Moore says.

There are also Near-Earth asteroids, which pass close to Earth and could be pushed into an orbit from which water and other elements could be extracted.

Then there’s the moon, which holds resources from gold and platinum group metals to Helium-3, water and rare earth metals. Even though mining operations require gravity and the Moon’s is only one-sixth of Earth’s, scientists say there is enough gravity to make it work.

Yes, there is already a global market for asteroid mining, and Allied Market Research estimates that it will top $3.8 billion by 2025.

They’re counting ongoing and future space missions, the rise in inflow of investments in space mining technologies, and the growing use of print materials obtained from asteroids in 3D printing technology.

According to Allied, while the spacecraft design segment of this market accounted for four-fifths of the total revenue in 2017 and is expected to continue to dominate through 2025, the big change here will be in the space mining segment, or the “operation segment”. That segment is expected to grow at a CAGR of over 29% by 2025 “due to a surge in investment by public and private stakeholders in space mining technologies for resource exploitation”.

“You can’t just think of space mining as something that will suddenly happen in 25 or 50 years,” says EuroSun’s Moore. “It’s already happening from an investment perspective. And the Asteroid Belt is just one aspect of this market. The entire global space market is worth hundreds of billions already.”

Indeed, Morgan Stanley estimates the global space economy to be worth $350 billion today. By 2040, it will be worth a cosmic $2.7 trillion.

Nor is the Psyche-16 Asteroid the only thing of interest in the Belt. Another small asteroid measuring 200 meters in length could be worth $30 billion in platinum.

Who Will Get There First?

China has vowed to dominate this race, and that’s an easier game for a country that controls all the major natural resource companies and maintains a tight leash on tech developers.

That’s not to say that the US doesn’t have ambitions here. The difference, though, is stark. While NASA is focused on space exploration and scientific missions, China is focused on a space-based economy that is zeroing in on long-term wealth generation.

Even Europe, where EuroSun is developing a major goldmine in Romania, has its hand in the game. In January, the European Space Agency(ESA) announced a deal with ArianeGroup, the parent company of Arianespace, to study a prep mission to the moon in 2025. It’s got natural resources on its mind.

Even tiny Luxembourg has 10 space-mining companies registered since 2016, with some targeting space ventures to the Moon, and others eyeing near-Earth asteroids for mining.

Tokyo-based iSpace, for instance, is a private space exploration company that plans to complete a lunar orbit in 2020, and a soft landing in 2021.

For Moore, the prospect is daunting, even if it is the clear future reality, because mining in EuroSun’s Rovina Valley project in west-central Romania has been a cakewalk, both in terms of geology and infrastructure. Everything lines up for a large, low-cost project (the biggest in-development gold mine in Europe.) That won’t be the case in space, but it’s a big bill that governments will want to help foot or risk losing their place in space.

Whoever gets there first will become the new god of gold, and the competition is heating up.