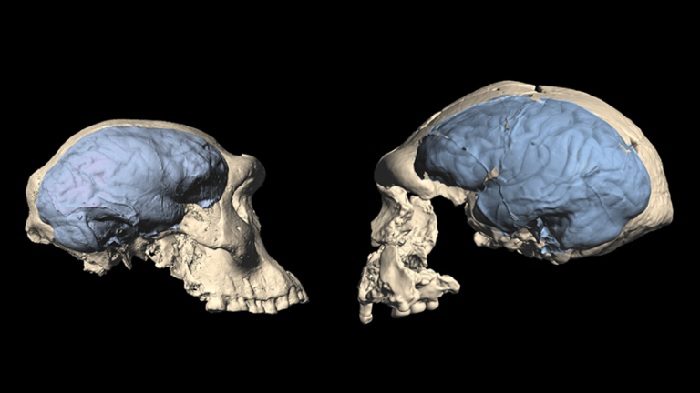 When human’s very ancient ancestors took their first steps out of Africa, some 3 million years ago, their brains looked more like those of great apes. A new study says our big brains developed only some 400,000 years later.

Using CT technology to scan what skull fossils remain from our earliest ancestors, researchers at the University of Zurich have turned conventional scientific thinking on its head, saying that our modern brains began to evolve in Africa only about 1.7 million years ago.

Prior to the Swiss research, conventional scientific thinking was that our hominid lineage arose some 2.8 million years ago, and our predecessors spread out of Africa around 2.1 million years ago.

The researchers, who published their study in the current edition of the journal Science, used CT scans to analyze replicas of the brain’s outer surface re-created from the oldest known fossils of early human skulls. The 1.77-million to 1.85-million-year-old fossils are from the Dmanisi archaeological site in Georgia, and were compared by the researchers with bones roughly two million to 70,000 years old from sites in Africa and Southeast Asia.

For their research, the Swiss scientists focused on the frontal lobes – the areas of the human brain linked with complex mental tasks such as toolmaking and language. Early hominids from Dmanisi and Africa were found to have retained a great-ape-like organization of their frontal lobe some 1.8 million years ago – long after they began moving away from Africa.

According to our analyzes, modern human brain structures only emerged 1.5 to 1.7 million years ago – in African homo populations,” said study author Christoph Zollikofer, a paleoanthropologist at the University of Zurich.

The findings reveal early humans may have possessed relatively primitive brains even after they first began dispersing from Africa. Speaking of their findings, the researchers pointed out to Science News that these more primitive populations were nonetheless capable of producing a variety of tools, as well as using animals and caring for their elders.

Their study, meanwhile, notes that the development of the more modern brain “largely coincides” with the earliest evidence of more complex “technocultural performance” in Africa, prompting the team to hypothesize that the biological and cultural changes were mutually dependent.

It was during this period that the earliest forms of human language developed,” said Marcia Ponce de León, anthropologist and study co-author.

The researchers say that hominids with modern human-like brains appeared in Southeast Asia shortly after 1.5 million years ago, suggesting additional dispersals from Africa separate from the earlier first migration.

The study said further research was needed to say with certainty whether this second wave merged with or replaced the earlier groups.