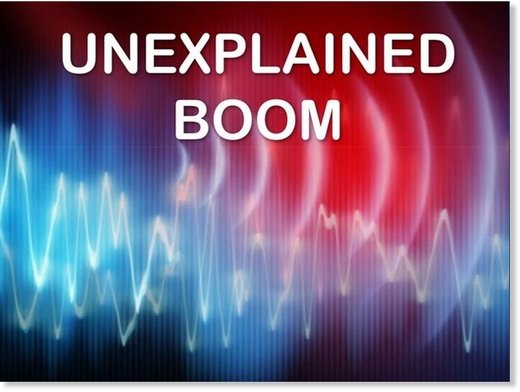 Editor’s Note: This story is from a few days back but I felt it is still important in light of the reports of these seem to be increasing again lately.

Portions of Sullivan County were rocked by noise that to some have compared to a sonic boom.

It occurred shortly before midnight on Saturday. Numerous residents grabbed their phones to report the disturbance directly to police agencies as well as 911. At the Monticello Police Department, officers seated in their patrol cars not only heard the boom, but they said it also rattled both their cars and the building for a second or two.

On the Times Herald-Record Facebook page, recordonline.com, about 100 readers commented on a post which raised the question, “What was that boom?” The post was also “shared” more than 100 times. Readers from Liberty to Cuddebackville, which are more than 30 miles apart, claimed to hear the very loud sound. “Loud enough to shake my floor and then a gusty wind for minute. Sure made the cat jump!” posted Izabella Urban of Varnell Road in Monticello. Lance Gibson in Grahamsville posted that he heard it and felt the shake, as did his friends in Rock Hill.

One reader wondered if it could have been the aftermath of meteor shower. Others went on Facebook to joke that the noise was the work of aliens.

Several questioned whether it was a sonic boom much like those felt along the coasts of New Jersey, New York City and Long Island last week. Those booms may have been caused by fighter jet flight tests at the Naval Air Station in Patuxent River, Maryland. “Turns out the US Navy was testing new fighter planes that can go 1200 mph. Maybe the same thing,” posted Rich Dean. Calls to the Stewart Air National Guard Base went unreturned.

When contacted by phone, Sullivan County Commissioner of Public Safety Dick Martinkovic said he doesn’t have the answer yet. “We have no idea,” said Martinkovic. “There’s been no confirmation by the government, the military or the scientific community.”

Some readers on Facebook said they even heard a couple of similar disturbances earlier in the day. According to Sullivan County Undersheriff Eric Chaboty, the Sheriff’s Office also received a call on Sunday morning about a booming noise that was heard near the Swinging Bridge Reservoir, more than seven miles west of Monticello.

Deputies went to check out the complaint, but didn’t find anything. “If anyone in the area can identify the source, contact the Sheriff’s Office and we’ll investigate,” said Chaboty.

The mystery of what caused the loud boom that shook Sullivan County remained on Monday.

Military officials as well as county officials returned to their offices with few clues to offer on what was responsible for the sonic boom-like disturbance that rocked portions of Sullivan County late Saturday night?

Whatever the noise was, it was powerful enough to shake the Monticello police station. It was even felt by officers seated in their patrol cars. People reported hearing the boom from Liberty to Cuddebackville, which are more than 30 miles apart.

Calls and emails to the Federal Aviation Administration resulted in this response. “A sonic boom would only come from a military aircraft. You need to contact the military; we don’t regulate their operations,” said Ian Gregor, FAA spokesman.

The Navy conducted flight tests on the F-35 fighter jet last week, which were heard by much of the eastern seaboard, but the Navy said it didn’t fly over Sullivan County. “We were not flying at all on Saturday night,” said Shawn Graham, Navy public affairs specialist based in Patuxent, Md., which is the closest naval air station to New York.