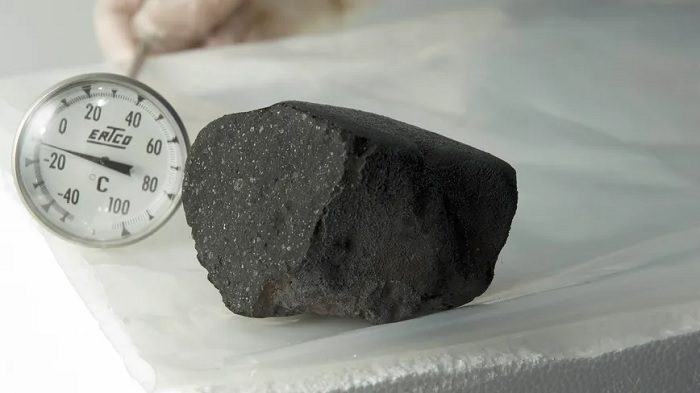 “Their discovery boosts the theory of panspermia, which suggests that life, or its building blocks, could be flying around space just waiting to impact a world with the right conditions to help it spring to, well, life.”

by Eric Mack
via CNet

The notion that the ingredients for life were seeded on Earth by hitching a ride on space rocks becomes more believable the closer we look at those rocks. Using state-of-the-art, ultra-high-resolution equipment, scientists have identified important building blocks of DNA and RNA in meteorites, including those that were missing in previous analyses.

Their discovery boosts the theory of panspermia, which suggests that life, or its building blocks, could be flying around space just waiting to impact a world with the right conditions to help it spring to, well, life. Panspermia was once considered a laughable hypothesis, but the deeper we dig into specimens from space, the less crazy it seems.

A study outlining the findings appears in this week’s issue of the journal Nature Communications.

Genetics of life as we know it are founded on DNA and RNA, which are composed of five organic molecules. They’re named adenine, guanine, cytosine, thymine and uracil. And these molecules can be broken into two categories of what’re called nucleobases.

On one hand, there are purines. This category of chemical compound includes guanine and adenine, and have previously been found in meteorites that impacted our planet. But DNA and RNA cannot form (and therefore life cannot develop) without the presence of the other kind of nucleobase, which has a larger and more complex structure: Pyrimidines. This category includes cytosine, uracil and thymine.

Pyrimidines had never been found in meteorite samples in significant concentrations — until now.

A team led by Yasuhiro Oba of Japan’s Hokkaido University used the latest in high-res mass spectroscopy tech and analytical techniques to detect miniscule amounts of nucleobases in samples from three different carbon-rich meteorites. They were able to identify a number of pyrimidine nucleobases that had been mysteriously missing in previous analyses.

“These compounds are present at concentrations similar to those predicted by experiments replicating conditions which existed prior to the formation of the solar system,” reads a statement from Oba and colleagues.

That’s why these new findings remarkably support the once dismissed panspermia hypothesis. Plus, further confirmation could come soon when scientists are able to examine samples taken from major asteroids Ryugu and Bennu by spacecraft developed by Japan’s space agency JAXA and NASA, respectively.