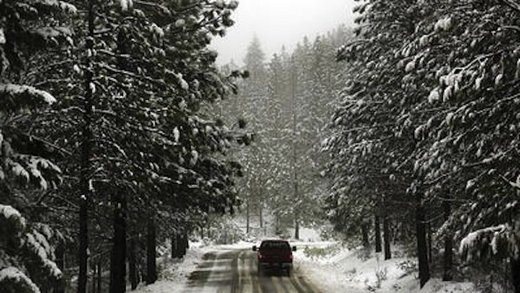 The first band of what forecasters predict will be the region’s most powerful storm in a decade moved into Northern California on Saturday, prompting official warnings of widespread flooding and epic snowfall.

“People are definitely in a state of panic right now,” said El Dorado County Sheriff’s Sgt. Todd Hammitt. “We’re getting a lot of calls asking if we’re going to be able to deal with everything. It’s the general pandemonium of not knowing what’s coming.”

The epic system — known as an atmospheric river — could dump so much rain and snow that some ski runs and roads will be declared off-limits, with forecasters warning of significant flooding, mudslides and avalanches in the Sierra Nevada.

Up to 12 inches of rain is expected to fall on areas below 8,500 feet beginning Saturday morning, and up to 7 feet of snow could bury higher elevations, according to the National Weather Service. Forecasters said the storm was packing the same wallop as one that hit Northern California in 2005, causing $300 million in damage.

This weekend’s system could bring 36 consecutive hours of heavy rain from Mammoth Mountain to Susanville, in Lassen County. Though that is good news for California, which is entering its sixth year of drought, the coming rain could melt already standing snow — feeding watersheds swollen from storms earlier this week, forecasters said.

“It’s going to be a busy weekend,” said Edan Weishahn, a meteorologist with the National Weather Service in Reno, sighing.

The rain moved in late Friday and continued into Saturday morning, with the most powerful punch expected later in the day.

The storm was also bringing wind gusts that topped 50 mph. Officials said they were low snow and icy conditions on Interstate 5 and 80 as well as U.S. 50 and some mountain highways.

The National Weather Service on Saturday morning released a new timeline for the storms:

Sunday: Heaviest rain and snow, with risks of flooding.

“We’re expecting heavy, heavy rain. It starts out as snow then turns to rain then turns to snow again,” Hammitt said. “We’re concerned about the melt increasing waterways and all the lakes.”

Hammitt recalled storms in 1997 and 2005 when runoff overwhelmed local rivers and creeks and sent water into roads and homes, lifting some buildings off their foundations.

“We have streams, creeks, rivers. We have lakes and ponds,” Hammitt said. “Anybody near a water source could be in jeopardy depending on the severity of the storm.”

Two sinkholes have been reported on El Dorado County roads as a result of three days of rain this week. County residents have already filled 12,000 sandbags in preparation for the storm and an additional 20,000 are on the way in, Hammitt said.

“Anytime it’s Mother Nature, you have to be ready,” Hammitt said.

While Northern California faced the brunt of the storms, a less powerful system moved into Southern California overnight, bringing scattered showers Saturday morning. The rain was harder to the north along the Central Coast. The wet conditions should continue on and off through the weekend.

But the much of the concern is focused in the Bay Area and Sierra.

“It’s a once-in-10-year event,” said Zach Tolby, a meteorologist with the National Weather Service in Reno. “It’s the strongest storm we’ve seen in a long time, the kind of setup we look for to get significant flooding.”

Indeed, large swaths of the Bay Area, Sierra foothills, Central Coast and parts of the Sacramento Valley were under flash-flood warnings. Flood concerns are heightened because officials fear that the snow may quickly melt due to heavy rain.

The so-called atmospheric river of airborne moisture known as the “Pineapple Express” will be felt across much of the state this weekend, though rain will be much heavier in the north than in the south.

“It’s going to be like buckets of water for a fairly sustained period of time,” Tolby said.

Wind gusts on mountaintops could top 130 mph in the northern Sierra, which is typical, Tolby said. At lower elevations gusts could reach 30 or 40 mph, he said, “but that’s an average windy day for us.”

Tolby said the storm is packing the same wallop as an atmospheric river that hit Northern California a decade ago that caused $300 million in damage, according to the U.S. Geological Survey.