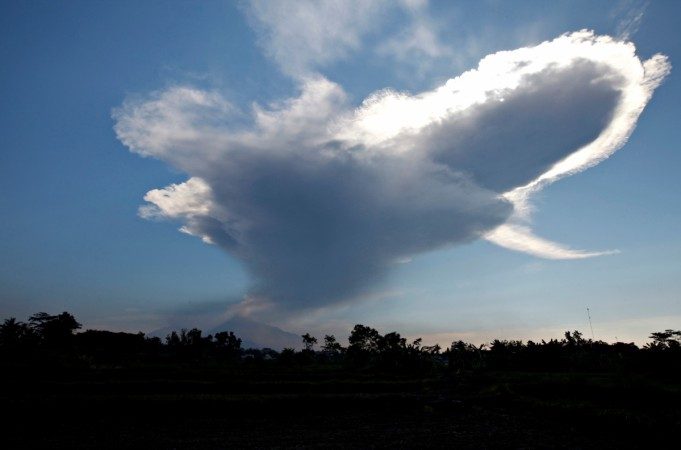 Looks like things are really starting to heat up around the world!

The US state of Hawaii is already reeling under the effects of the erupting Kilauea volcano, and now hundreds of residents have been evacuated in Indonesia after Mount Merapi volcano, on the densely populated island of Java, erupted and sent a column of volcanic ash into the atmosphere Friday, May 11.

The disaster mitigation agency asked residents living within a radius of 5 km (3 mile) to move to safer locations and shelters.

After columns of ash and volcanic material as high as 5,500 meter (18,000 ft) were noticed, the airport in Yogyakarta, the nearest big city to the volcano, was also shut down, reported Reuters.

Disaster agency spokesperson Sutopo Purwo Nugroho explained that while the residents have been asked to remain calm and alert, the agency is continuously monitoring the eruption and its impact. He also said that for now the status of the Merapi volcano remains “normal,” according to the Daily Star.

He also revealed that the 120 people, who had gone hiking, were also safe.

The eruption also is said to have caused tremors in the surrounding areas.

Merapi’s latest eruption has been described as phreatic, which means magma heats up ground water and vapor is released due to the pressure.

The Merapi volcano last erupted in the year 2010 killing about 353 people. The Indonesian government had raised the alert to its highest level and about 19,000 people had been asked to evacuate. Officials also said that the region experienced about 500 tremors.

The island nation has of late made headlines for volcano eruption. In October 2017, several residents of Bali and Vanuatu were evacuated as two volcanoes in the region started rumbling.

Mount Agung, which showed major activity, witnessed over 700 incidents in just one day and the strongest tremor was measured at 4.3 on the Richter scale.

Not just the tremors, seismologists also said that Mt Agung had inflated in the last few weeks and cracks on it were emitting white smoke that was gradually increasing.

Strangely, a priest had blamed tourists for the seismic activity and believed that the Mount Agung volcano became active due to tourists having sex on the mountain. The spot is popular with them as it makes for a good hiking destination.

According to the priest, Mount Agung was angry about people having sex and menstruating on it. “The climbers did that,” Fairfax media quoted him as saying.