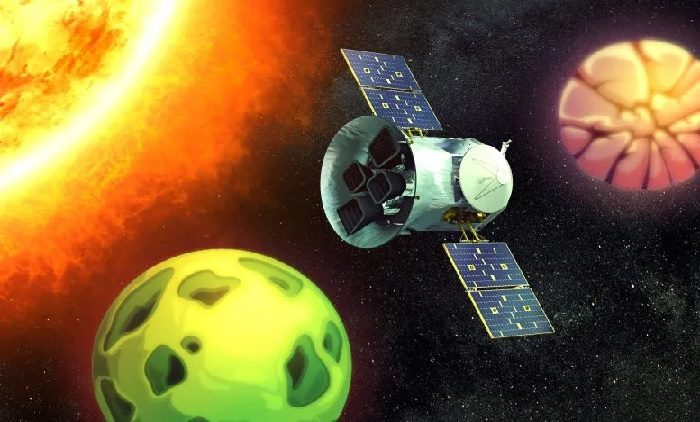 Astronomers at MIT and elsewhere have discovered a new multiplanet system within our galactic neighborhood that lies just 10 parsecs, or about 33 light-years, from Earth, making it one of the closest known multiplanet systems to our own.

At the heart of the system lies a small and cool M-dwarf star, named HD 260655, and astronomers have found that it hosts at least two terrestrial, Earth-sized planets. The rocky worlds are likely not habitable, as their orbits are relatively tight, exposing the planets to temperatures that are too high to sustain liquid surface water.

Nevertheless, scientists are excited about this system because the proximity and brightness of its star will give them a closer look at the properties of the planets and signs of any atmosphere they might hold.

“Both planets in this system are each considered among the best targets for atmospheric study because of the brightness of their star,” says Michelle Kunimoto, a postdoc in MIT’s Kavli Institute for Astrophysics and Space Research and one of the discovery’s lead scientists. “Is there a volatile-rich atmosphere around these planets? And are there signs of water or carbon-based species? These planets are fantastic test beds for those explorations.”

The team will present its discovery today at the meeting of the American Astronomical Society in Pasadena, California. Team members at MIT include Katharine Hesse, George Ricker, Sara Seager, Avi Shporer, Roland Vanderspek, and Joel Villasen?or, along with collaborators from institutions around the world.

The new planetary system was initially identified by NASA’s Transiting Exoplanet Survey Satellite (TESS), an MIT-led mission that is designed to observe the nearest and brightest stars, and detect periodic dips in light that could signal a passing planet.

In October 2021, Kunimoto, a member of MIT’s TESS science team, was monitoring the satellite’s incoming data when she noticed a pair of periodic dips in starlight, or transits, from the star HD 260655.

She ran the detections through the mission’s science inspection pipeline, and the signals were soon classified as two TESS Objects of Interest, or TOIs — objects that are flagged as potential planets. The same signals were also found independently by the Science Processing Operations Center (SPOC), the official TESS planet search pipeline based at NASA Ames. Scientists typically plan to follow up with other telescopes to confirm that the objects are indeed planets.

The process of classifying and subsequently confirming new planets can often take several years. For HD 260655, that process was shortened significantly with the help of archival data.

Soon after Kunimoto identified the two potential planets around HD 260655, Shporer looked to see whether the star was observed previously by other telescopes. As luck would have it, HD 260655 was listed in a survey of stars taken by the High Resolution Echelle Spectrometer (HIRES), an instrument that operates as part of the Keck Observatory in Hawaii. HIRES had been monitoring the star, along with a host of other stars, since 1998, and the researchers were able to access the survey’s publicly available data.

HD 260655 was also listed as part of another independent survey by CARMENES, an instrument that operates as part of the Calar Alto Observatory in Spain. As these data were private, the team reached out to members of both HIRES and CARMENES with the goal of combining their data power.

“These negotiations are sometimes quite delicate,” Shporer notes. “Luckily, the teams agreed to work together. This human interaction is almost as important in getting the data [as the actual observations].”

In the end, this collaborative effort quickly confirmed the presence of two planets around HD 260655 in about six months.

To confirm that the signals from TESS were indeed from two orbiting planets, the researchers looked through both HIRES and CARMENES data of the star. Both surveys measure a star’s gravitational wobble, also known as its radial velocity.

“Every planet orbiting a star is going to have a little gravitational pull on its star,” Kunimoto explains. “What we’re looking for is any slight movement of that star that could indicate a planetary-mass object is tugging on it.”

From both sets of archival data, the researchers found statistically significant signs that the signals detected by TESS were indeed two orbiting planets.

“Then we knew we had something very exciting,” Shporer says.

The team then looked more closely at TESS data to pin down properties of both planets, including their orbital period and size. They determined that the inner planet, dubbed HD 260655b, orbits the star every 2.8 days and is about 1.2 times as big as the Earth. The second outer planet, HD 260655c, orbits every 5.7 days and is 1.5 times as big as the Earth.

From the radial-velocity data from HIRES and CARMENES, the researchers were able to calculate the planets’ mass, which is directly related to the amplitude by which each planet tugs on its star. They found the inner planet is about twice as massive as the Earth, while the outer planet is about three Earth masses. From their size and mass, the team estimated each planet’s density. The inner, smaller planet is slightly denser than the Earth, while the outer, larger planet is a bit less dense. Both planets, based on their density, are likely terrestrial, or rocky in composition.

The researchers also estimate, based on their short orbits, that the surface of the inner planet is a roasting 710 kelvins (818 degrees Fahrenheit), while the outer planet is around 560 K (548 F).

“We consider that range outside the habitable zone, too hot for liquid water to exist on the surface,” Kunimoto says.

“But there might be more planets in the system,” Shporer adds. “There are many multiplanet systems hosting five or six planets, especially around small stars like this one. Hopefully we will find more, and one might be in the habitable zone. That’s optimistic thinking.”

This research was supported, in part, by NASA, the Max-Planck-Gesellschaft, the Consejo Superior de Investigaciones Científicas, the Ministerio de Economía y Competitividad, and the European Regional Development Fund.

Story Source: Materials provided by Massachusetts Institute of Technology. Original written by Jennifer Chu. Note: Content may be edited for style and length.