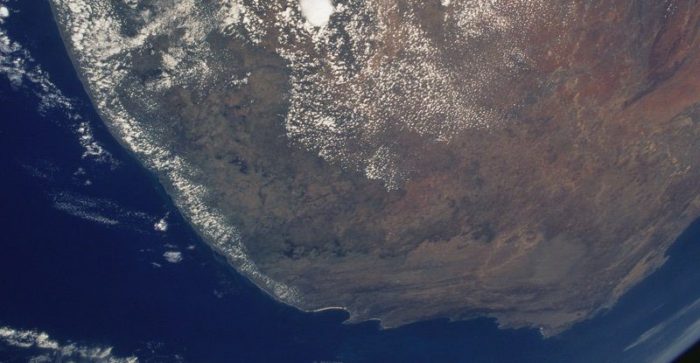 Above our heads, something is not right. Earth’s magnetic field is in a state of dramatic weakening – and according to mind-boggling research from earlier this year, this phenomenal disruption is part of a pattern lasting for over 1,000 years.

Earth’s magnetic field doesn’t just give us our north and south poles; it’s also what protects us from solar winds and cosmic radiation – but this invisible force field is rapidly weakening, to the point scientists think it could actually flip, with our magnetic poles reversing.

As crazy as that sounds, this actually does happen over vast stretches of time. The last time it occurred was about 780,000 years ago, although it got close again around 40,000 years back.

When it takes place, it’s not quick, with the polarity reversal slowly occurring over thousands of years.

Nobody knows for sure if another such flip is imminent, and one of the reasons for that is a lack of hard data.

The region that concerns scientists the most at the moment is called the South Atlantic Anomaly – a huge expanse of the field stretching from Chile to Zimbabwe. The field is so weak within the anomaly that it’s hazardous for Earth’s satellites to enter it, because the additional radiation it’s letting through could disrupt their electronics.

“We’ve known for quite some time that the magnetic field has been changing, but we didn’t really know if this was unusual for this region on a longer timescale, or whether it was normal,” physicist Vincent Hare from the University of Rochester in New York said in February this year.

One of the reasons scientists don’t know much about the magnetic history of this region of Earth is it lacks what’s called archeomagnetic data – physical evidence of magnetism in Earth’s past, preserved in archaeological relics from bygone ages.

One such bygone age belonged to a group of ancient Africans, who lived in the Limpopo River Valley – which borders Zimbabwe, South Africa, and Botswana: regions that fall within the South Atlantic Anomaly of today.

Approximately 1,000 years ago, these Bantu peoples observed an elaborate, superstitious ritual in times of environmental hardship.

During times of drought, they would burn down their clay huts and grain bins, in a sacred cleansing rite to make the rains come again – never knowing they were performing a kind of preparatory scientific fieldwork for researchers centuries later.

As such, an analysis of the ancient artefacts that survived these burnings reveals much more than just the cultural practices of the ancestors of today’s southern Africans.

“We were looking for recurrent behaviour of anomalies because we think that’s what is happening today and causing the South Atlantic Anomaly,” Tarduno said.

“We found evidence that these anomalies have happened in the past, and this helps us contextualise the current changes in the magnetic field.”

Like a “compass frozen in time immediately after [the] burning”, the artefacts revealed that the weakening in the South Atlantic Anomaly isn’t a standalone phenomenon of history.

“We’re getting stronger evidence that there’s something unusual about the core-mantel boundary under Africa that could be having an important impact on the global magnetic field,” Tarduno says.

The current weakening in Earth’s magnetic field – which has been taking place for the last 160 years or so – is thought to be caused by a vast reservoir of dense rock called the African Large Low Shear Velocity Province, which sits about 2,900 kilometres (1,800 miles) below the African continent.

“It is a profound feature that must be tens of millions of years old,” the researchers explained in The Conversation last year.

“While thousands of kilometres across, its boundaries are sharp.”

This dense region, existing in between the hot liquid iron of Earth’s outer core and the stiffer, cooler mantle, is suggested to somehow be disturbing the iron that helps generate Earth’s magnetic field.

There’s a lot more research to do before we better understand what’s going on here.

As the researchers explain, the conventional idea of pole reversals is that they can start anywhere in the core – but the latest findings suggest what happens in the magnetic field above us is tied to phenomena at special places in the core-mantle boundary.

If they’re right, a big piece of the field weakening puzzle just fell in our lap – thanks to a clay-burning ritual a millennia ago. What this all means for the future, though, no-one is certain.

“We now know this unusual behaviour has occurred at least a couple of times before the past 160 years, and is part of a bigger long-term pattern,” Hare said.

“However, it’s simply too early to say for certain whether this behaviour will lead to a full pole reversal.”

The findings are reported in Geophysical Review Letters.

A version of this article was first published in March 2018.