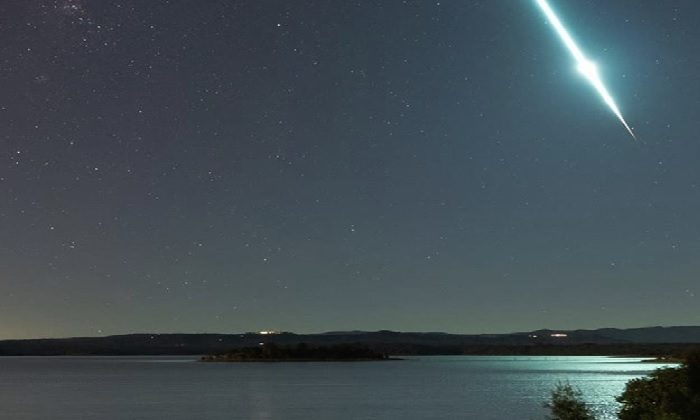 Mysterious Bangs, Flashes over NSW, Australia Was Likely a Meteor

Residents in northern NSW were a little shaken up on Sunday evening when a series of loud bangs was heard coming from the sky.

“It sounded like a bomb dropping actually but there was a zooming sound and small sonic boom, I thought it was made by a fast military jet,” one person wrote on Facebook on the strange noises around 5pm.

“Heard it in Lismore and it shook the house! Pretty awesome sound,” another person added. One person even wrote that they saw an “amazing glow over the roof line” as well as the strange noise. “Heard it Nimbin shook my walls,” another Facebook user chimed in.

Dave Reneke from Australasian Sky and Space Magazine, confirmed to ABC that the mysterious noise was most likely a meteor burning and breaking up as it headed toward earth. “It sounded like a big fire cracker going off, but the windows shook,” he said.

It comes a week after a photographer captured a stunning image of a meteor flying over Brisbane (pictured in the headline image).

The loud noise is due to the meteor breaking up as it shot through the atmosphere.

“If you’re close enough to it you’ll hear a sonic boom,” Mr Reneke told the ABC.

“Every now and then a larger piece about the size of a cricket ball or volleyball comes through the sky and they become a different object, they become what’s called a fireball,” Mr Reneke said.

Although meteors usually burn up into tiny pebbles before they reach earth, Mr Renek said there had been an unusual amount of them recently.

“We’ve had quite a few of those over the last two weeks, and I’ve never ever gone through a period where we’ve had so many in such a short time.”

David Finlay runs the Australian Meteor Reports Facebook page and urged locals to be on the look out for any rocky meteor debris which may have fallen to Earth. It could even be valuable, he said.

“It all depends what type and how rare they are. A witnessed fall is worth more. If it goes through a house roof or hits a car they are called ‘hammer stones’ and are highly sought after,” he wrote.