But was it tannerite?

Sometime after 6 p.m. Saturday, dozens of mid-Michigan residents took to social media to ask the question: Did anyone else hear that?

A loud blast heard or felt from south of Shepherd to north of Clare and from Rosebush to Coleman was most likely caused by an exploding firearms target, Isabella County Sheriff Michael Main said.

Central dispatch took one report of a loud boom from the 4000 block of East Coleman Road just before 6:30 p.m. and while a check of the area yielded no definitive results, Main said it was most likely a Tannerite target.

“We get that type of complaint from time to time, it sounds like an explosion or Dynamite,” Main said.

Tannerite is the brand name of a type of shooting target that explodes when hit by an object traveling at a high velocity, like a bullet.

It is legal to use, available at gun stores and has no restrictions, Main said. 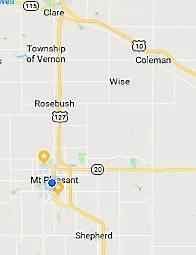 Residents reported hearing the loud explosion or feeling it shake homes all around Isabella County and even into neighboring counties.

“We heard it here, loud and clear, two miles east of Rosebush,” LouAnn Mogg wrote on a Facebook post in Mt. Pleasant Townie Talk, a social Facebook group dedicated to sharing Mt. Pleasant history and news. “A boom that rattled the house for an instant…scared the daylights out of all of us.”

Many other residents shared similar experiences, reporting the boom from Broomfield and Chippewa roads, five miles south of Coleman, north east of Clare, six miles south of Shepherd and through out the city of Mt. Pleasant.

While many theorized the explosion was likely Tannerite, others wondered if it was an earthquake, a Dynamite blast, a oil pipe line explosion, a sonic boom from a military jet, a weather phenomenon or other possibilities.

More than one person reported hearing a rumor that a group of people at a bachelor party set off a large amount of Tannerite, however many others questioned the miles between reports, wondering just how much of the explosive material would need to be set off to create such a large boom.

Communities all over the country have reported similar Tannerite booms over the years including in Kent County last April and an explosion at a party in Bristol, New Hampshire in 2016 that was felt by residents 50 miles away.