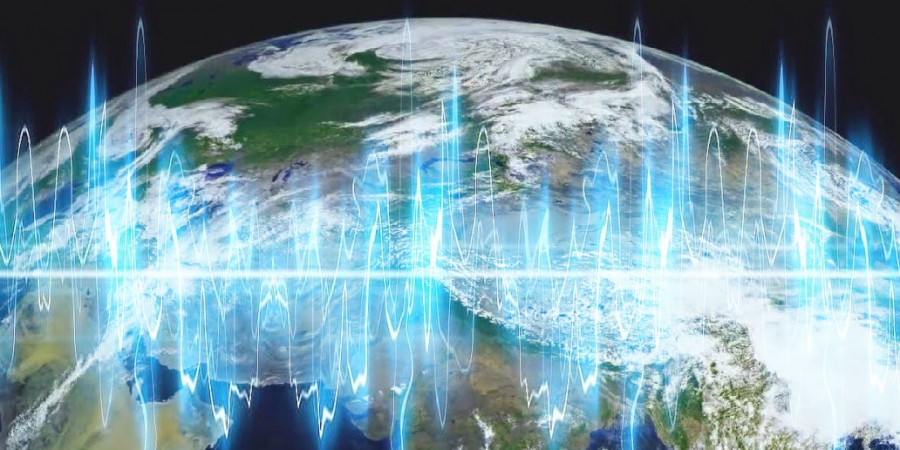 Mysterious Booms from 64 Locations Around the World this Year, What Could be Causing it?

Residents in Alabama were left baffled last week when a loud boom resounded across much of the state.

The boom, nicknamed ‘Bama Boom’, has left experts stumped, with suggested causes ranging from supersonic aircrafts to meteors exploding in the atmosphere.

This isn’t the first time that the mysterious sound has been heard, and incidents are becoming more frequent according to some reports.

This year alone, similar noises have been reported 64 times this year, in locations including Michigan, Lapland, St Ives, Swansea and Yorkshire.

Cause: Unknown, suggested explanations include a sonic boom from an aircraft or a meteorite

The Birmingham National Weather Service tweeted: ‘Loud boom heard: we do not see anything indicating large fire/smoke on radar or satellite; nothing on USGS indicating an earthquake.’

The service suggested that the sound was either caused by a sonic boom from aircraft, or a meteorite from the Leonid shower.

But Nasa has since cast doubt on these explanations.

Speaking to ABC 3340, Bill Cooke, head of Nasa’s Meteoroid Environment Office, said that the boom could have been caused by a supersonic aircraft, a ground explosion, or a bolide – a large meteor that explodes in the atmosphere unrelated to the Leonid shower.

While the noise was picked up by the US Geological Survey, data suggests that the boom wasn’t the result of an earthquake.

The boom may have been caused by a military flight by a supersonic jet, although the US Air Force is yet to confirm this.

The Bama Boom is just one of many mysterious booms heard worldwide this year.

The day after the boom in Alabama, a similar noise was heard in Idaho.

Multiple people reported hearing a loud boom over the Lewiston-Clarkston Valley around 23:00.

Many of the reports described the sound as being similar to a sonic boom, although its cause and location remain unclear.

Cause: Unknown, suggested explanations include a meteorite, a gas bottle explosion or military plane

On October 10, a boom was heart over Cairns, Queensland that had the city baffled.

Residents’ theories ranged from a meteorite to a gas bottle explosion or military plane.

A FA-18 Hornet plane was heard flying over Cairns the previous night, but no jets were flying on the night when the ‘explosion’ happened.

Residents in Abergavenny, Wales, were also shocked after they heard a series of booms on May 11.

Speaking to the Abergavenny Chronicle, one resident said: ‘It nearly gave me a heart attack it was that loud. At first I thought it was shotgun blast or a firework, but it was way too loud for that. It sounded more like a tank going off.

‘My husband said it was probably mini meteors colliding with the earth, but have you ever heard such nonsense?’

Again, the source of the Welsh booms have remained unsolved.

But other booms this year have had explanations behind them.

On November 17, a boom in Lapland was caused by a fireball from a falling meteor.

Footage showed a bright light in the sky over Inari in Finland – but the flash was so intense it was also seen in Russia’s Kola Peninsula and in northern Norway.

Stargazers reported seeing the sky ‘light up like day’ for a few seconds alongside a loud noise as the space rock plummeted towards Earth.

On October 27, another boom was heard over Eyre Peninsula in Australia, as a bright blue meteor shot across the sky.

The loud bangs weren’t caused by the fireball hitting Earth, and instead were caused by the change in pressure as the meteor soared through the air.

Speaking to News.com.au, Renee Sayers, a spokeswoman from the Desert Fireball Network, explained: ‘The shock wasn’t from it hitting the ground; It is like a sonic boom shock, a pressure shock.’

Other booms have been known to be caused by secret military missions.

On May 7, a boom rattled Central Florida, caused by a military mission ending at the Kennedy Space Centre.

The US Air Force tweeted: ‘The Air Force #X37B #OTV4 has returned from orbit and landed safely at @NASAKennedy.’ 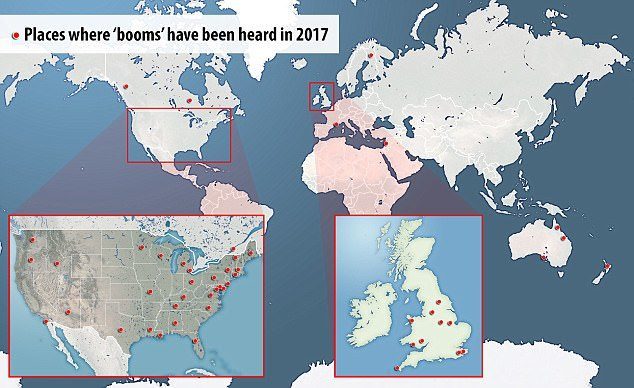 Mysterious booms have been reported 64 times this year, in locations including Michigan, Lapland, St Ives, Swansea and Yorkshire. Incidents are becoming more frequent according to some reports.