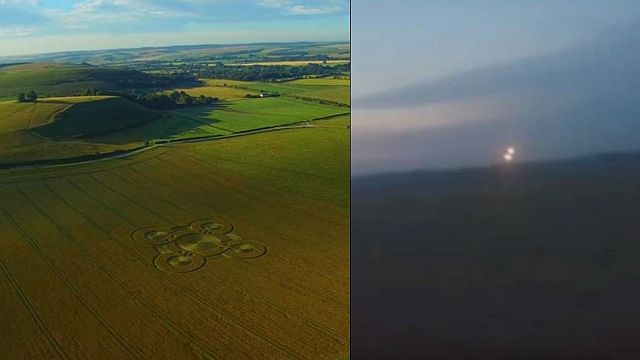 An impressive crop circle was discovered near Battlesbury Hill in Wiltshire, UK on July 5, 2017, the question is who created it?

The circle resembles an ancient universal symbol called a ‘Celtic Shield Knot’, see enlarged images of this crop circle at cropcircleconnector, and was first seen in the third and fourth centuries AD and used by the Celtics who placed this knot near ill people or on battle shields for warding off the evil spirits or any other danger.

Maybe the appearance of this universal symbol of protection is some sort of an early message to inform us about near-future-events which will have an impact in Earth’s history?

Moreover, what never has been mentioned is the fact that the location of this crop circle is just over twenty kilometers from the famous Stonehenge where during the solstice of June 21, 2017 strange UFO lights in the sky were seen at Stonehenge around 9pm.

Although the appearance of the strange lights at Stonehenge occurred two weeks earlier we may wonder whether these lights have something to do with the crop circle in Wiltshire since there are no traces in the field or around the circle which could be an indication that the circle is not human-made.