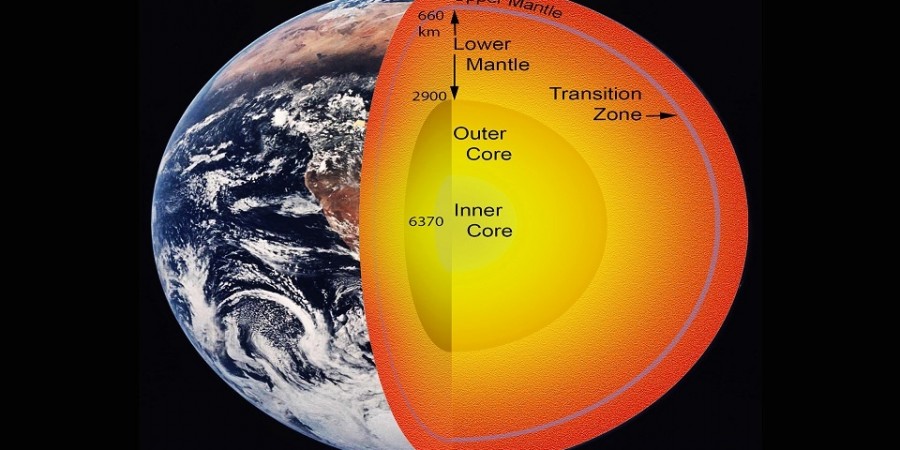 Ever since the whole 2012 prophecy shenanigans I’ve had a slightly more than casual curiosity with earthquake patterns and earthquake oddities. A couple years prior to and a few years following 2012 I became slightly obsessed with checking the quake reports and on a few occasions I noticed a few strange things.

One of those strange things being the rare odd occurrence of extremely deep earthquakes. I think the first one that ever popped out at me and caught my attention was one in Russia’s Sea of Okhotsk in 2013.

Yesterday on May 29, 2016 I was taking a quick glance at the days earthquakes and there were no unusually large quake to take note of but something did stick out. Bolivia had a fairly modest 4.3 event, however the depth was the point of interest, it was 562km deep in the earth. I’m not sure if most of you realize how extreme that is but just think how far down just ONE kilometer or mile is and you quickly realize how astonishing 562km deep in the earth is (click here to see the headline image in full to get a visual idea of the depth we are talking about) This 4.3 Bolivia extreme deep event may seem like just another rare odd event, except it isn’t as rare as it probably should be.

Here are two interesting records, the strongest deep-focus earthquake in seismic record was the 2013 Okhotsk Sea earthquake (magnitude 8.3) that occurred with an epicenter in the Sea of Okhotsk at a depth of 609 km. However, the deepest ever recorded earthquake is the 1994 Bolivia earthquake with a focal depth of 647 km and a moment magnitude of 8.2 (source wikipedia)

A bit more on the Okhostsk deep earthquake in 2013 which I mentioned earlier (source):

A magnitude 8.3 earthquake that struck deep beneath the Sea of Okhotsk on May 24, 2013, has left seismologists struggling to explain how it happened. At a depth of about 609 kilometers (378 miles), the intense pressure on the fault should inhibit the kind of rupture that took place.

It’s a mystery how these earthquakes happen. How can rock slide against rock so fast while squeezed by the pressure from 610 kilometers of overlying rock?” said Thorne Lay, professor of Earth and planetary sciences at the University of California, Santa Cruz.

Seismic analysis revealed that this was the largest deep earthquake ever recorded, with a seismic moment 30 percent larger than that of the next largest, a 1994 earthquake 637 kilometers beneath Bolivia.

Deep earthquakes occur in the transition zone between the upper mantle and lower mantle, from 400 to 700 kilometers below the surface. They result from stress in a deep subducted slab where one plate of the Earth’s crust dives beneath another plate. Such deep earthquakes usually don’t cause enough shaking on the surface to be hazardous, but scientifically they are of great interest.

The energy released by the Sea of Okhotsk earthquake produced vibrations recorded by several thousand seismic stations around the world.”

The researchers also mention that this extreme deep quake behaved very unlike other deep quakes and instead behaved like a normal shallow quake which they thought impossible due to the amount of weight and force acting on the materials at this extreme depth and the consistency of the materials being more flowing as a result of the extreme temperatures.

Here is some fascinating details on the record deep 1994 Bolivia deep earthquake:

Harvard assigned it a depth of 647 km and a really big magnitude of 8.2

A remarkable feature of South America is that it possesses a disproportionate fraction of the world’s large very deep quakes.

Bolivia holds the largest deep quake record and Columbia second, northern Peru third also the 10th, 13th, 15th and 18th. Why such large earthquakes occur here and not elsewhere is a significant question.

Although the 1994 Bolivia earthquake was felt throughout much of South America, it caused only minor damage. It broke windows in tall buildings and caused some structural in La Plaz, Cochabambam and Oruro, all towns within about 500 km of the epicenter. It caused numerous landslides in Peru.

An unusual feature of the 1994 Bolivia earthquake was that it was felt in North American cities at distances of 50-80 Degrees from the epicenter. 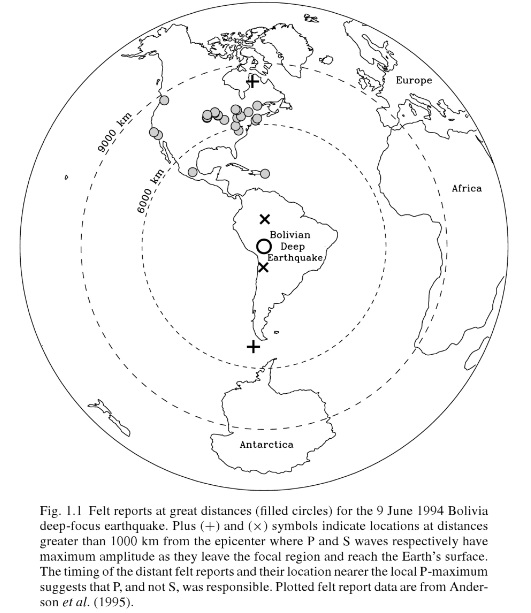 Here is an excerpt from an short article someone wrote back in 1994 on the strange deep quake.

Most earthquakes are shallow. They are concentrated no deeper than 20-25 kilometers down. However, a few extremely deep quakes rumble at depths of about 600 kilometers. On June 8, 1994, what may be the largest deep earthquake of the century — magnitude 8.2 — exploded 640 kilometers beneath Bolivia. “Exploded” may or may not be the proper word.

Geophysicists are really not certain what causes the very deep quakes, because at 640 kilometers rocks are so hot that they flow rather than snap under geological stresses. The more common, shallow earthquakes are generally created when rocks snap and fracture. Since the deep quakes seem to be concentrated in subducted slabs of terrestrial crust that plunge down deep into the earth’s mantle, geophysicists suppose that the increasing heat and pressure applied to the descending slabs may cause “explosive” phase changes in minerals contained in the slabs. Phase changes often involve volume changes that, if sudden, might generate seismic waves. Too, water of hydration in minerals may be explosively turned into vapor. But this is all surmise at present.

The Bolivian quake also caused the whole earth to ring like a bell. Every 20 minutes or so, the entire planet expanded and contracted a very small but detectable amount. This immediately made the thought of an exploding planet or one breaking up enter my head.

Why are these deep Earthquakes even able to happen when scientifically they should not be possible…what could be causing them. Could it be an unseen external force acting on our planet or is it just some type of natural occurrence that we’ve yet to understand.

I’m going to keep an ongoing list of new extreme deep quakes which I will do my best to keep track of and add any deep quakes of around 400+ KM deep so we can try to determine if there is indeed increasing occurrence.

IF YOU ENJOY THIS SITE PLEASE TELL OTHERS ABOUT US…SHARING IS CARING
SHOW YOU CARE, COMMENT AND SHARE (BELOW)
The views expressed and information presented in this article are those of the writer and their sources. – Republishing of this article is allowed with full attribution to this site (BENDEDREALITY.COM) and the author of the article – If you are interested in being a guest writer for our site, please CONTACT US and let us know, we would be glad to consider you for a guest writing opportunity (EXPERIENCE NOT MANDATORY).