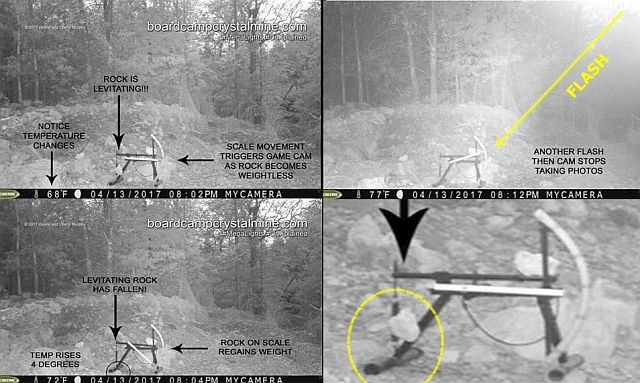 The board Camp Crystal Mine near Mena, Arkansas, discovered in 2008 and opened as a day camp in 2012, seems a nice place to visit until February 2017 when strange things began to happen.

Since February strange phenomena like unknown lights and flashes, rocks levitating, mysterious spheres have been seen by many people including the owner of the crystal mine Orville Murphy, until the owner decided to close the place some months ago and invited researchers to investigate the strange phenomena.

MUFON, the mutual unidentified flying objects network, also investigated the unexplained phenomena and they witnessed it for themselves.

On April 13, 2017 they set up a game cam and surprisingly the cam captured images of strange lights and levitating rocks at the crystal mine which you can see in the below video. Watch and judge for yourself.

Until till now, they have no answer to what is going on there. What could cause this phenomena? Is it purely natural? Crystal energy? Is it supernatural? Paranormal? Extraterrestrial?

It seems they will reopen the mine so visitors can witness the strange phenomena themselves.