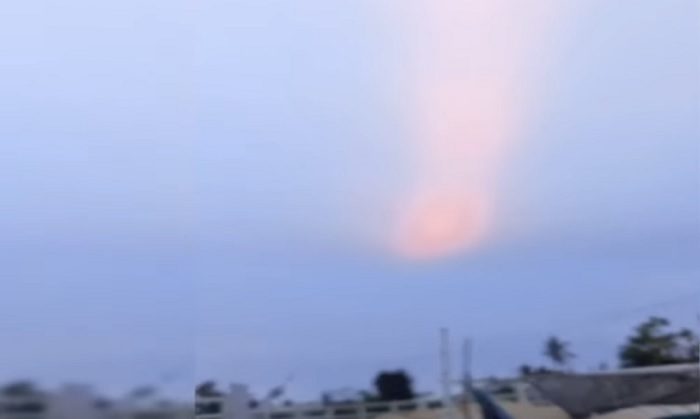 Mysterious Light Appeared in the Sky over Vietnam

A strange light that resembled a meteor appeared in the sky over Quang Ngai Province.

Clips were posted by a woman on her personal Facebook page of the strange light streak.

According to Ms. T., the light trail was accidentally recorded by her around 5:30 pm on September 29th. The band is bright red like a shooting star, but it doesn’t move.

“A lot of people think that at that time the sun was setting, so there was an image like that. But the image I filmed appeared in the east so it couldn’t be said that the sun had already set. The light strip appeared red at first, there was a bright red color. the tail was like a shooting star and then it melted very quickly “- recalls Mrs. T..

Le Thi My (who lives in Quang Ngai City) said he also saw a streak of red light in the sky 3 days ago. It was late afternoon the trail looked like a big shooting star the red light was very beautiful. “Some people think it’s a sign of a big storm,” My said.

According to Mr. Nham Xuan Sy, Director of Quang Ngai Hydrometeorological Station, with the initial images provided above it is still impossible to conclude anything. “If this image is true, then this is a very strange phenomenon, appearing in the sky for the first time in Quang Ngai,” commented Mr. Sy.