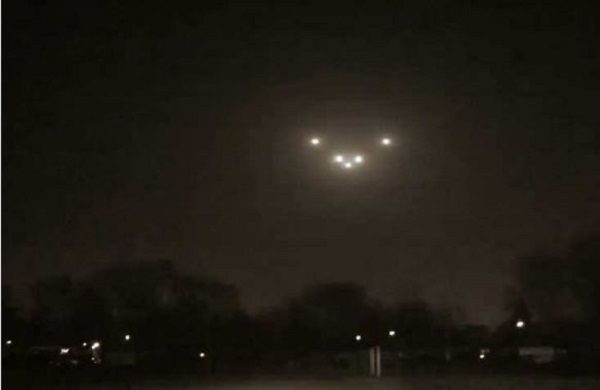 Did you see mysterious lights in the sky over Mesa over the weekend? If so, you’re not alone! Viewer Jeremy White sent us video of some lights that he spotted.

He said the lights, which were “bright red like fire” right before he started recording, began to flicker until they vanished. The clip he sent is 1 minute and 14 seconds.

White said he and his wife, who was behind the wheel, drove toward the lights as they tried to figure out what they were seeing.

“We saw what looked like embers from a fire rising straight up into the sky,” White wrote in an email to us. “As we started heading down the street, I noticed what we thought were lights from a blaze were not changing pattern and were, in fact, moving in unison.

“While driving, the lights started to move towards our direction and began to pass overhead,” he continued. “This is where I started to record as we realized something abnormal was going on.”

“Also, these were not stars due to how quickly they moved across the sky,” he said, explaining that he saw at least one other person taking photos of the lights. (Was that you? Please send your photos and video to [email protected]!)

“The sky was also very clear tonight, so I can say for sure no lights went behind clouds or anything; they simply just flickered then went out,” White said. “It very well [might] have been my imagination, but I am almost positive I also saw a pitch black outline of an object between all the lights.”

Not the first lights in the sky — some explained, some not

A few months ago, viewers told us about some strange lights they spotted in the East Valley.

Over the summer, a viewer sent us a video of what thought might be a meteor streaking across the sky in Mesa. Several others, including well-known storm photographer Mike Olbinski, chimed in on social media to say that they saw it, too.

That report came nearly two months after an asteroid – NASA confirmed it — lit up the pre-dawn sky throughout the state.

The June 2, 2016 meteorite made national headlines.

A research team from Arizona State University actually found pieces of it on land belonging to the White Mountain Apache Tribe in eastern Arizona.

There also were reports of mysterious lights in the sky back in February.

Of course, perhaps the most famous report of mysterious lights in the sky – not dissimilar from what White described — happened nearly 20 years ago on March 13, 1997, and, like the June 2016 meteorite, was news all over the country.

Many believe the V-shaped formation was a UFO, even claiming stars disappeared behind it and then reappeared as it passed.

The Air Force eventually said the triangular formation was a group of flares dropped by an A-10 Warthog that was on a training exercise at the Barry Goldwater Range, but not everybody buys that explanation.

Even now, two decades later, many people continue to have questions.

Dr. Lynne Kitei, a physician who set aside her practice to investigate the phenomenon that became known as “The Phoenix Lights,” — made an 84-minute documentary about the occurrence.

“Most things can be explained,” she said on the 16th anniversary of The Phoenix Lights. “Only a small percentage of things that are anomalies can not. But when we have this sighting, that went throughout the entire state.Thousands and thousands of people saw it; it was at roof-top level, a mile- to 2-mile wide formation of lights that seemed to be attached to something, and it’s unexplained. And it’s happening worldwide in other countries that are much more open to this kind of phenomena, as being unearthly.”