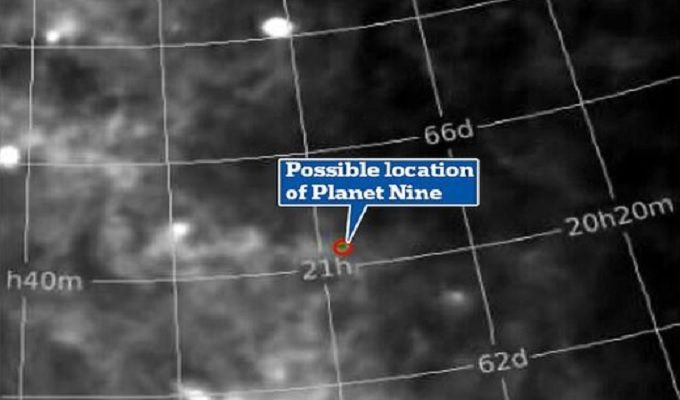 by Ryan Morrison
via Daily Mail

A mysterious, small and cold object seen 20 billion miles from Earth by astronomers in 1983 may have been the elusive Planet Nine, according to a new report.

Astronomers have speculated over the existence of a hidden planet in the outer reaches of the solar system for decades, gaining renewed interest in 2016 when new evidence came to light, but nothing has ever been directly observed.

Michael Rowan-Robinson, from Imperial College London, turned to the archives in the hope of finding a ‘blip’ in old data that could point to its existence.

He analysed data collected by the Infrared Astronomical Satellite (IRAS) in 1983, finding three potential sources that might just be ‘Planet Nine’. 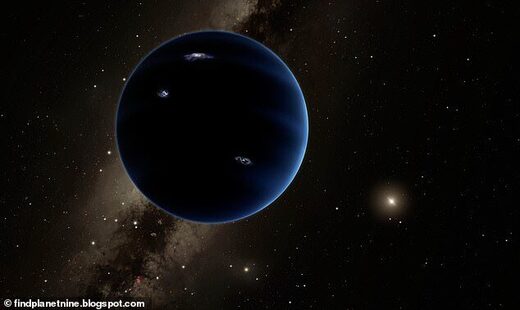 A mysterious, small and cold object seen 20 billion miles from Earth by astronomers in 1983 may have been the elusive Planet Nine, according to a new report

While Rowan-Robinson admits that the probability of the object being Planet Nine is ‘not overwhelming’, he claims it ‘would be worthwhile to check.’

Astronomers Mike Brown and Konstantin Batygin of Caltech reignited interest in the potential ‘Super Earth’ planet, after finding small objects in the Kuiper Belt were orbiting as if they’d been pushed about by the gravity of a larger object.

A number of theories have been proposed to explain this unusual behaviour, including the prospect of Planet Nine actually being a grapefruit-sized black hole.

But the concept of a ‘Super Earth’, a category of planet found in many other systems outside our own, is pervasive, drawing astronomers to the cause.

IRAS was a satellite operated for 10 months from January 1983, and during its time in orbit it took a far-infrared survey of 96 per cent of the sky.

This is the perfect part of the electromagnetic spectrum for finding small, cool objects like Planet Nine, but it was long enough ago that astronomers weren’t loking for the distant world when the data was collected. 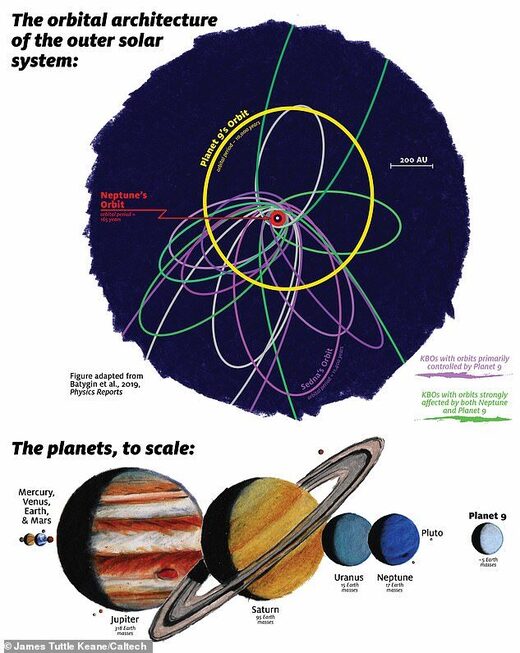 Planet 9 is theorised but has never been seen before. It orbits beyond Pluto in the depths of the solar system and will be discovered in the next ten to 15 years, scientists claim. it is also said to be bigger than Earth but smaller than the existing gas giants (pictured)

This was no small task, as the satellite had detected 250,000 points of data during its three months in space.

However, after an exhaustive search, the astronomer found just three were potentially linked to Planet Nine – from June, July and September of 1983.

In these data points the satellite picked out an object moving across the sky, although it was in a region of space close to the galactic plane.

Having three time points showing it moving across the sky can also point to its orbital period – how long it takes to go around the sun.

This data can then be used to see where it might be now, and where to look in other data sources, such as the Panoramic Survey Telescope and Rapid Response System (Pan-STARRS), launched in 2008.

So far, an analysis of data from Pan-STARRS hasn’t led to any positive results. In fact astronomers have completely failed to spot the candidate planet.

‘Dynamical studies are needed to check whether such an object is consistent with the ephemerides of other Solar System objects and whether this object can account for the clustering of the orbits of Kuiper belt dwarf planets,’ Rowan-Robinson wrote.

‘The IRAS detections are not of the highest quality but it would be worth searching at optical and near infrared wavelengths in an annulus of radius 2.5-4 deg centered on the 1983 position.

‘This candidate could be ruled out if radio or other observations confirmed the reality (and stationarity) of the IRAS sources at the 1983 … positions.’

The findings have been published in the preprint server arXiv.

Scientists have debated the existence of Planet Nine since it was first introduced several years ago, but a new study has determined the orbit of the alleged celestial object.

Caltech researchers Mike Brown and Konstantin Batygin have plotted the orbital path of the mystical planet, which has yet to be discovered.

In a blog post, Brown detailed that the ‘highest probability’ of Planet Nine’s location is near aphelion – the point at which it is furthest from the sun – around 60 degrees in Right Ascension, ‘pretty close to the galactic plane.’

If in fact Planet Nine were at the median distance of aphelion right now, it would be roughly 500 astronomical units (AU), or approximately 46.5 billion miles away from the sun.

This means any data points from that region are affected by galactic cirrus – filamentary clouds that glow in far-infrared, and so what could be Planet Nine, could also just as easily be noise from these clouds, Rowan-Robinson explained.

According to the IRAS data, if the points of data are Planet Nine, it is up to five times the mass of Earth and actually orbiting 225 AU from the sun.

To put this in context, the Earth is currently 92 million miles from the Sun, or 1 astronomical unit (AU), whereas Pluto – which was reclassified in 2006 from a planet to a dwarf planet – is 40AU, or 3.7 billion miles.

The incredible distance and relatively small size make it challenging to find – it is too far away from the sun to be illuminated by the star, so only visible in blips, and theorised by the impact its gravity has on objects beyond Neptune.

PLANET NINE: ORBITS OF OBJECTS BEYOND NEPTUNE SUGGEST ‘SOMETHING LARGE’ IS THERE

Astronomers believe that the orbits of a number of bodies in the distant reaches of the solar system have been disrupted by the pull of an as yet unidentified planet.

First proposed by a group at CalTech in the US, this alien world was theorised to explain the distorted paths seen in distant icy bodies.

Researchers say a body of this size and mass would explain the clustered paths of a number of icy minor planets beyond Neptune.