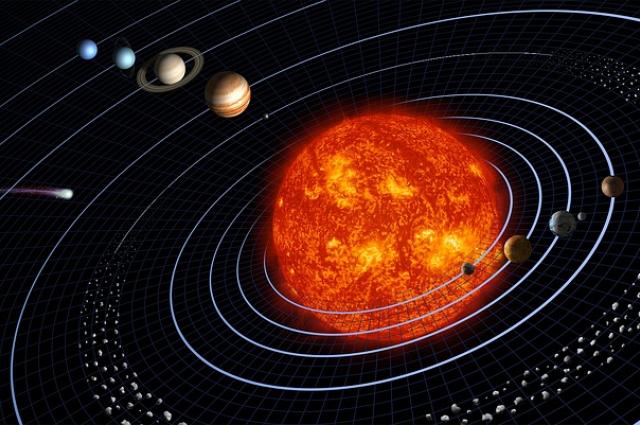 Two recent studies have shown that the existence of a mysterious, hypothetical Planet Nine could explain why the planets in our Solar System don’t fully line up with the Sun.

Researchers have been speculating about a ninth planet since January this year, and these latest studies add more weight to the hypothesis that, at some point in time at least, there was an extra planet orbiting our Sun.

In fact, if Planet Nine does exist (or did), it would help to explain something that scientists have puzzled over for decades – why the Solar System is tilted.

What does that mean?

Well, basically, all of the main eight planets that orbit our Sun do so on the same plane, making the Solar System look like a disc.

The problem is that the Sun spins at a different angle, with its axis roughly 6 degrees off from the rest of the planets.

In the past, researchers have attempted to explain this slant by blaming the temporary tug of a passing star, or interactions between the Sun’s magnetic field and the disc of dust that formed our planets. But none of these hypotheses have fully accounted for the misalignment.

But now the two new studies – complete independently from one another in the US and France – show that the existence of Planet Nine could explain the tilt.

“Because we think Planet Nine has a significant inclination, if it exists, then that means it would tilt things,” one of the researchers in the US study, Elizabeth Bailey from the California Institute of Technology (Caltech), told New Scientist’s Rebecca Boyle.

“It’s one puzzle piece that seems to fit together, and it really seems to be in support of the Planet Nine hypothesis.”

In case you’re unfamiliar, Planet Nine is a hypothetical planet that might orbit the Sun (or did at one point). Researchers think that it’s most likely an ice giant measuring roughly five to 20 times the mass of Earth.

And while nothing about the potential planet has ever been proven, some researchers say that it could have once been an exoplanet that got stuck in the Sun’s gravitational pull back when the Solar System was in its infancy.

According to both teams, the addition of Planet Nine to the Solar System could have been enough to jostle the other planets away from the Sun’s axis, causing the tilt we see today.

This hypothesis was first tested earlier this year by the Caltech team who plugged the hypothetical mass of Planet Nine into a complex computer model that simulated how it would affect some of the smaller, icy dwarf planets that linger at the outer edge of the Solar System.

In the end, they concluded that a hypothetical Planet Nine could account for the dwarf planets’ odd movements. Now, the team says the same thing could have happened to the giant planets closer to the Sun.

“Using an analytic model for secular interactions between Planet Nine and the remaining giant planets, here we show that a planet with similar parameters can naturally generate the observed obliquity as well as the specific pole position of the sun’s spin axis, from a nearly aligned initial state,” the team states.

In the French study, conducted by astronomers at the Côte d’Azur Obersvatory in Nice, the team suggests that Planet Nine’s tilt is likely to blame for this misalignment, rather than its mass.

According to the researchers, while mass is often used to explain why objects in space influence one another – and that’s what the Caltech team looked into – in this case, it would mean that Jupiter – the juggernaut of our Solar System – could have caused the tilt, which it didn’t.

“What is important is that the perturbing planet is off-plane. Jupiter cannot cause its own tilt,” team member Alessandro Morbidelli told New Scientist.

Instead, their models showed that Planet Nine’s tilt could have skewed everything else – coming to the same conclusion as the Caltech researchers.

Combined, the results of both the studies add a significant amount of evidence that Planet Nine exists, though not enough to actually prove it.

Instead, the studies seem to say that something influenced the early Solar System and made the mysterious 6-degree tilt – and Planet Nine fits the profile.

While Planet Nine will stay hypothetical until researchers manage to actually find it in the night sky, it’s not stopping researchers from piling up evidence of its existence.

For example, back in April, a team started devising a way to spot the planet using black-body radiation, which basically scans the sky for hotspots that could be planets cooling down.

These latest results haven’t been peer-reviewed as yet, so we need to take them with a grain of salt for now. But both have been uploaded to pre-print site arXiv.org – here and here – and are accepting comments and feedback from other physicists before they submit their research to a journal.

While the debate over Planet Nine will likely continue well into the future, it’s exciting to see that it fits into models explaining why our Solar System is the way it is.