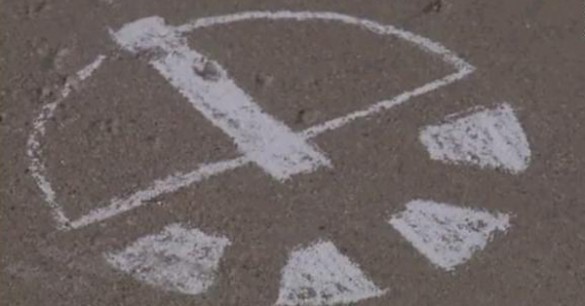 According to local media coverage, the strange appearances of the drawings, notes and flash drives have been reported at the University of Colorado Boulder, Colorado State University and the University of Northern Colorado at Greeley. The flash drives and notes contain references to additional YouTube videos with more symbols. Much of the information has been turned over to campus and local police but no information on sources or meanings has been determined so far.

“It looks like the sun and a bow and arrow.” 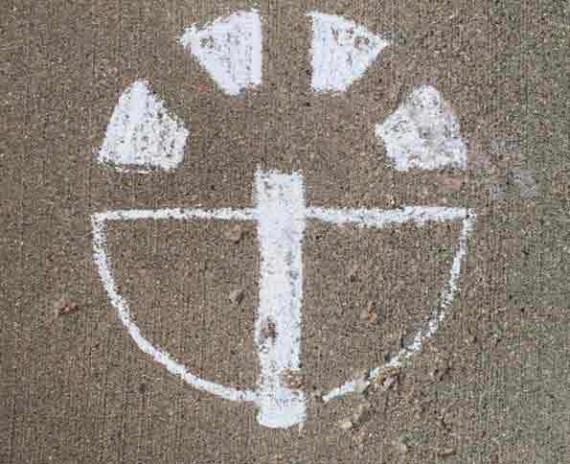 That’s UNC student Aaron Lyman’s description of the primary symbol – a half-circle, a line and four dots – that has been found on the ground and in a video called SearchForMyMarks which is an artistic rendition of someone drawing the marks in various locations.

Michael Mills, an expert in symbology the State University of New York at Geneseo who once taught at UNC Greeley, reviewed the symbol and attempted to decipher it.

“First of all, the sign is apparently meant to be seen with the half circle facing right and the squares to the left … It reminds me vaguely of the symbol for Mammon, a demon, a sign that appeared in the film Constantine … this person is obviously well verse in semiotics and probably cultural studies … Self-promotion or a political cause? We shall see.”

Mills’ comment on self-promotion refers to one theory that the symbols and videos are the work of an artist looking for recognition. The videos also contain number and letter sequences (E 23 E 6 27 18 8 4 2 112 is one) that Mills thinks might be astrological.
While social media sites teem with theories and possible solutions to the puzzles, college and police officials say they’re on top of the investigation and there’s “no identifiable threat.” That doesn’t calm students who watch the videos, like Aaron Lyman.

“I watched the first couple of seconds of the first one. I was kind of freaked out a little bit.”

In the late 60s and early 70s, the Zodiac Killer was allegedly responsible for at least seven murders in California of men and women between the ages of 16 and 29. The murderer was famous for sending letters with cryptograms and a symbolic signature. The murders have been heavily investigated yet remain unsolved. 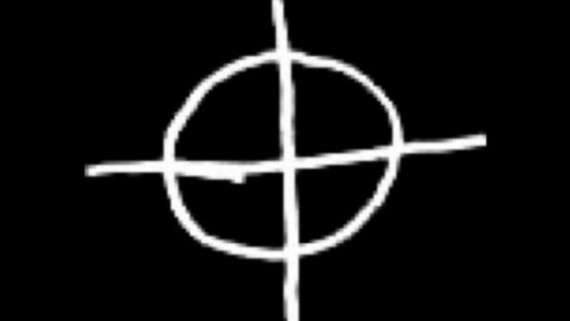 The “signature” of the Zodiac Killer