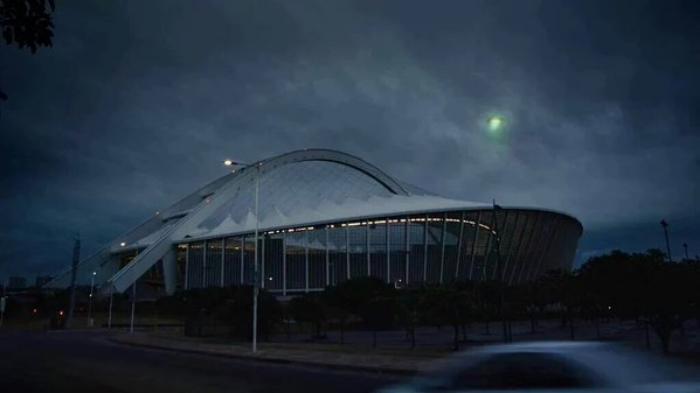 An unidentified flying object was apparently spotted 1 000 feet (about 300m) above a plane before it was seen hurtling towards earth on Monday night, the National Sea Rescue Institute (NSRI) said on Tuesday.

The sighting occurred just a day after a similar sighting of a green UFO off the coast of Spain and about a year after a green UFO was seen by many witnesses in Cape Town. What are they and are they related?”

“A Boeing 737 cargo aircraft captain and co-pilot, flying from Cape Town International Airport to Port Elizabeth International Airport, reported seeing what appeared to be a green object increasing in altitude past the cockpit of their aeroplane, reaching to about a thousand feet into clouds above them, and then returning towards earth at high speed past the cockpit of the aeroplane,” NSRI spokesperson Craig Lambinon said.

“The sighting was reported to air traffic control at Port Elizabeth International Airport who requested NSRI’s assistance to investigate the possibility that an aircraft or craft may be in difficulty.”

Lambinon said the NSRI’s Jeffreys Bay team monitored the matter throughout the night.

“The green object has not been seen since and there are no reports of anyone, or craft or aircraft overdue or missing.”

Lambinon said the incident happened about 10 nautical miles off the Jeffreys Bay shore.

At first it was thought the object was a green parachute flare, but this was ruled out because the flares “cannot reach that height”.

“No further reports of sightings have been received and the incident remains a mystery,” Lambinon said.

There were still no answers for the mysterious green lights that apparently appeared in the skies above Cape Town at the weekend with some people adamant they had seen an unidentified flying object (UFO) and others blaming a marketing campaign.

The South African Astronomical Observatory told News24 its understanding was the lights were part of a test for light show equipment at the Cape Town Stadium, based on information it heard mentioned on radio in the morning.

The inaugural HSBC Cape Town Sevens takes place on December 12 and 13 at the Cape Town Stadium. It is the second leg of the HSBC World Rugby Sevens Series, a week after the opening tournament in Dubai (December 4 and 5).

Saru spokesperson Marlon Kruger told News24 they were unaware of any light equipment tests on Saturday when the lights were spotted.

“It is probably some sort of marketing campaign, but we do not know anything about it. If it was a test, I would have known about it.”

He said a tweet by the official Sevens account did however use the incident of the light as ” ambush marketing”.

“It was just to make use of the situation [with the light],” Kruger said.

The tweet by HSBC Cape Town 7s from Sunday said: “Reports of a UFO seen in Cape Town last night. The World is Coming For Cape Town – Meet the Welcoming Committee.”

Reports of a UFO seen in Cape Town last night. The World is Coming For Cape Town – Meet the Welcoming Committee. pic.twitter.com/KsyOPdmAWF

Twitter users were abuzz with the sighting on Saturday with others later claiming the same lights were seen over Durban and Johannesburg.

User Nicolas tweeted a picture of the light above Long Street in Cape Town on Saturday saying: “Everyone’s tweeting about a UFO sighting off Long Street. Please let it be aliens. But nice aliens.”

Everyone's tweeting about a UFO sighting off Long Street.

Please let it be aliens.

Others posited even weirder theories including one who uploaded a YouTube video suggesting the lights are inter-dimensional portals.

The conspiracy theory video mistakenly showed a picture of a green light above the Moses Mabhida stadium in Durban, while mentioning Cape Town – and shows fake pictures of a flying saucer.