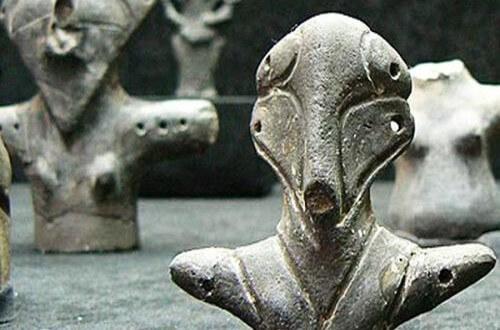 Vinca statues seem to confirm that ancient people were visited by extra-terrestrials.

In almost every ancient culture to have been unearthed and sufficiently studied by archaeologists and historians, there is an amazing running theme. Each of these ancient civilizations reveals artifacts, texts, and monuments which seem indicate interaction with extra-terrestrial beings. One such prominent example is the Vinca civilization which existed in around 7000 BC and spread across several European countries including the Balkans and the North of Greece.

The Vinca people were highly advanced for the age that they lived in. Archaeologists have deduced that they developed a syllabic-alphabetic language and or linear writing system. This is remarkable considering that they managed to achieve this mark of a highly evolved society thousands of years before the great ancient civilizations of the Euphrates and Ancient Egypt. In fact, for many experts on the subject, they are a complete historical anomaly.

Recently, archaeologists investigating this mysterious ancient society have been carrying out extensive excavations of the land in the shadow of the Serbian city of Belgrade to find out more about the Vinca people. To their astonishment, they discovered no less than two thousand highly unusual figurines which are completely distinct to the art of the neighboring cultures in the region.

These figures have triangular shaped faces, almond shaped eyes and very slight mouths and noses. Some of the figurines almost appear to resemble animals such as grasshoppers and some depict hybrid humanoids which appear to be half-human and half-reptile.

The appearance of these figurines is striking. Many depictions of extra-terrestrials in ancient literature and art reference the same oval shaped heads, enormous almond eyes with dark pupils and small noses and mouths. The heads of the Vinca figurines are also considerably out of proportion to the slight proportions of the body. Once again, this is a common descriptive in ancient texts describing ‘gods’ that descended from the skies.

The appearance of these highly revealing figurines in conjunction with the remarkable advancement of the Vinca society has suggested to some people that these highly ancient people may well be have been in contact with extra-terrestrial beings. If the story of the Vinca people’s interaction with these aliens is similar to other cultures around the world, then it is likely that they worshiped these aliens as gods who brought them the illumination required to evolve their society to a more enlightened state.