A mysterious booming noise in a small California town has residents baffled, and has sparked many conspiracy theories.

Every weekday, between 11 a.m. and 2 p.m., a thunderous noise rocks through Sonora, California, according to locals.

The cause of the mysterious booms remains a mystery, with local residents pointing to everything from mining operations to aliens.

Glen White, a local teacher and geologist who has researched the sound extensively, told local ABC affiliate KXTV-TV that he thinks the noise comes from bombs and grenades exploding.

White said he believes the explosions come from an Army depot outside of Hawthorne, Nevada, about a hundred miles away from Sonora. There, a private company disposes and dismantles old munitions, White said.

“They go through old munitions bombs, grenades, then they destroy them,” White explained, and has video footage to back up his claim.

Ken Thomas, a contracting officer for the Hawthorne Army Depot, told ABC News today that they do detonate munitions regularly at the depot when the munitions are past their shelf-life, but he is not convinced that it can be heard in Sonora.

“It doesn’t feel right that what we’re doing here would be heard 200 miles away when there’s a mountain range in between us,” Thomas said. “My office is 27 miles from where they detonate the old munitions, I only hear it here maybe one time a month, and just barely and it’s like ‘Was that a boom?'”

While White thinks he has solved the town’s mystery, he told KXTV-TV he remains open to hearing other people’s theories, as long as they are backed up by scientific research. 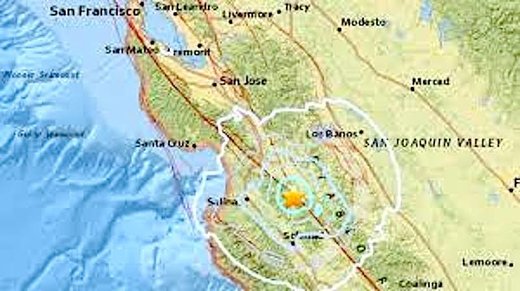 An earthquake swarm is continuing to rattle the South Bay near Hollister. In the past four days, more than 39 tremors have hit the area on a section of the San Andreas system known as the Calaveras Fault. Between Sunday night and Monday afternoon, 39 quakes greater than 1.0 have occurred and 20 more than 2.0, seven over 3.0, one 4.1 and one 4.2, according to the U.S. Geological Survey.

No injuries or damage have been reported.

Earthquakes with a magnitude of 3.0 are common along this area of the fault, and swarms occur more rarely. A series of 4.0s and 4.6s hit in the early 1970s, and in 2001, the USGS recorded three earthquakes around 4.0.

“This part of the Calaveras Fault creeps and it continually deforms,” explains Ole Kaven, a research geophysicist with the USGS. “What that generally suggests is that strain doesn’t build up sufficiently to create very large earthquakes, though that possibility can’t be entirely excluded.”

For the latest West Coast earthquake tips, tsunami warnings and tips on preparing your home, visit the SFGATE earthquake section.