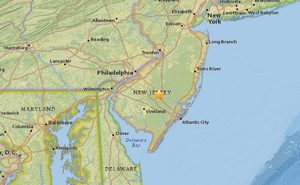 A loud boom and shaking sensation was reported throughout Southern New Jersey on Wednesday morning that baffled people from the Shore to Burlington County.

“There were calls into the 911 center and we didn’t know anything about it at the time, so no action was taken,” North Wildwood Mayor Patrick Rosenello said.

So what was it?

The U.S. Geological Survey’s National Earthquake Information Center says there was not any seismic activity but detected a possible sonic boom about 9 miles off North Wildwood at 10:18 a.m.

In other words – it was probably a high speed jet.

“We see a lot of military planes flying by up and down the coast all the time and I’m assuming that’s what we’re talking about here,” Rosenello said.

Weather experts say one of the reasons the boom carried so far from the shore has to do with something known as a temperature inversion.

On a typical day, air temperature cools with height and sound waves disperse up into the atmosphere.

With a temperature inversion, a layer of warmer air acts as a lid, sending the boom back to Earth and amplifying the sound.

The 177th Fighter Wing in Atlantic City say it was not one of their jets that caused boom.

Barbara Ferguson in North Wildwood almost fell over in her house says she doesn’t want a repeat performance anytime soon.

“Everything was rattling and shaking. My dog jumped off the bed, ran under the bed, he wouldn’t come out,” she said.

Officials say sonic booms have been caused in the past by military planes doing supersonic drills along the east coast, but it wasn’t immediately clear if that’s what happened Wednesday.

No injuries or damage were reported.