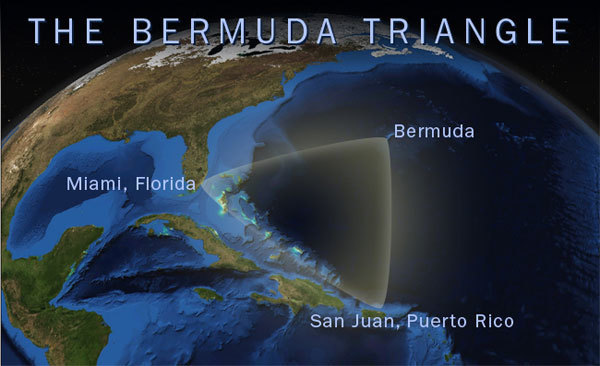 The mysterious disappearance of ships and aircraft in the Bermuda Triangle may stem from methane explosions created by craters, according to a team of scientists.

A team of researchers from the Arctic University of Norway may have uncovered the reason for the mysterious disappearances of ships and aircraft in the Bermuda Triangle. The team believes that the answer lies in underwater methane explosions caused by a series of craters that were recently discovered off the coast of Norway.

The craters – which are not actually near the Bermuda Triangle – are around half of a mile wide each, 150 feet deep and were likely created by the buildup and popping of methane under the seabed.

“Multiple giant craters exist on the sea floor in an area in the west-central Barents Sea … and are probably a cause of enormous blowouts of gas,” the team said. ‘”The crater area is likely to represent one of the largest hotspots for shallow marine methane release in the Arctic.”

The team made the findings using a newly developed radar that shows detailed images of the seabed, which allowed them to examine the areas of methane seepage around the world in great detail.

The proposed explanation would explain the “ghost” ships discovered with entire crews dead showing no signs of trauma, as methane bubbles could lead to the asphyxiation of everyone on board such ships. Furthermore, it also matches up with reports from sailors claiming that they witnessed water bubbling and foaming in the area for no apparent reason.

Watch: The Mystery Of The Bermuda Triangle

Although the explanation is still just a theory, is has been considered by experts in the past as a potential cause of the disappearances in the Bermuda Triangle

“There is a version that the Bermuda Triangle is a consequence of gas hydrates reactions,” Igor Yelstov, a researcher from the Trofimuk Institute not involved in the current research, said last year. “They start to actively decompose with methane ice turning into gas. It happens in an avalanche-like way, like a nuclear reaction, producing huge amounts of gas. That makes the ocean heat up and ships sink in its waters mixed with a huge proportion of gas.”

Now, with the discovery of the craters, the current team of researchers is examining whether these bubbles could actually sink ships and will present their findings next month at the annual meeting of the European Geosciences Union.