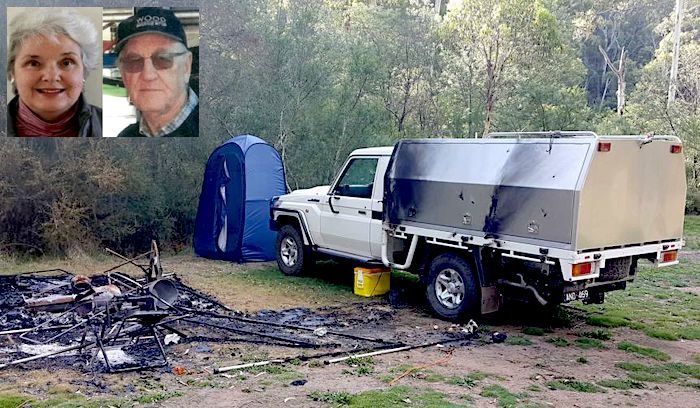 Photos have emerged of the burnt-out campsite and abandoned car of two older friends, missing in Victoria’s High Country for 11 days.

Russell Hill, 74, left his Drouin home on March 19 with plans to camp along the Dargo River in Gippsland.

Carol Clay, 73, a former Victorian president of the Country Women’s Association, told friends she was going away and would be back home in Pakenham no later than March 29.

Mr Hill’s car and their campsite were found abandoned and burnt out near Dry River track at Billabong in the Wonnangatta Valley, north of Licola on Friday.

Ms Clay’s belongings were in the car. Police are trying to work out why the pair abandoned the well-equipped vehicle when it was still able to be driven. They are also investigating who lit the fire at the campsite and who extinguished it.

Inspector Gaffee said police had considered the possibility the pair was attempting to self-isolate to avoid COVID-19, but that was unlikely as they had planned to return on the weekend.

“Russell Hill is an experienced camper and bushwalker and knows the area well. His routine when he goes away is to contact friends or family every evening via radio, and the last contact was on March 20.”

About 30 search and rescue police, State Emergency Service and Parks Victoria crews conducted a foot search near the campsite yesterday. A police helicopter and drone are also being used to search the area.

Four riders on horseback from the Mountain Cattlemen’s Association are using their knowledge of the area to expand the search along Dargo River and nearby tracks. Inspector Gaffee said they were combing through challenging terrain. “It’s pretty rugged, thick bush [with] steep inclines and very remote … and there’s lots of different tracks they may’ve taken,” he said.

A staging post has been set up at Surveyor’s Hut along the Wonnangatta Track as the search enters its sixth day.

Mr Hill made a radio transmission on March 20 via high-frequency radio to report he was having transmission issues. At the time, he was at Wonnangatta Station, four hours south-east of Wangaratta, and intended to follow Wonnangatta Track towards Dargo.

“We know other campers have been in the area over the last week to 10 days, so we’re calling on anyone who saw an older pair in the area to contact us,” Inspector Gaffee said.

Ms Clay was president of the Country Women’s Association of Victoria between 2011 and 2013. Current state president Marion Dewar said she was an esteemed member and friend. “All members are very concerned for Carol and her companion,” she said.

Police say the pair were camping companions and were not romantically involved.

Police have ended the search for two friends aged in their 70s who went missing during a camping trip in Victoria last month. Rain hampered the search and it is now highly unlikely the pair has survived. It snowed on higher peaks in the area on Sunday.

Inspector Craig Gaffee said he informed relatives today that the search was over.

“Right from the outset I was really confident we’d be able to find both of them. The fact that it’s got to this stage is really a surprise to me and really disappointing for all searchers involved. Arson chemists haven’t been able to determine a cause of the fire at this stage but we don’t believe that fire was deliberately lit,” Inspector Gaffee said.

Inspector Gaffee said there are a number of possible scenarios, some more likely than others.

“The more likely ones are that they are still in the valley, that a third person or parties are involved, or perhaps the people themselves have gone somewhere else. But we haven’t got the evidence to suggest that yet.”