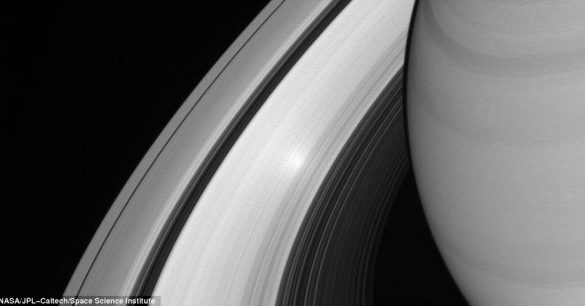 Does an “opposition surge” sound like something that’s nothing to worry about? That’s what NASA calls what looks like a big bulge in the B ring in a recent photograph sent back by the Cassini spacecraft … a photograph that was mysteriously kept hidden since it was taken with the Cassini wide-angle camera on June 26, 2016. Is NASA concerned about the attention being paid to former NASA scientist Dr. Norman Bergrun’s claims that the bulges are huge spaceships in Saturn’s rings?

“An ethereal, glowing spot appears on Saturn’s B ring in this view from NASA’s Cassini spacecraft. There is nothing particular about that place in the rings that produces the glowing effect — instead, it is an example of an “opposition surge” making that area on the rings appear extra bright. An opposition surge occurs when the sun is directly behind the observer looking toward the rings. The particular geometry of this observation makes the point in the rings appear much, much brighter than would otherwise be expected.” 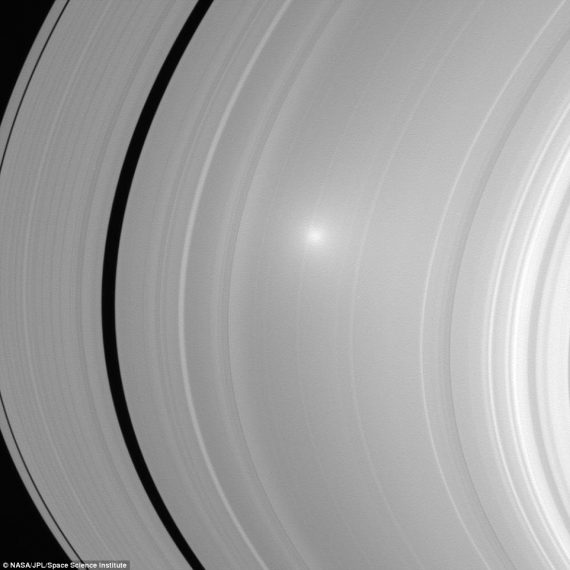 That’s the official word from NASA’s statement released with the photograph. The sun is behind the rings and Cassini took the photograph at a 28 degree angle. That caused a “region of opposition” which made the shadows of the ring particles invisible. This caused the bright spot to appear brighter. The bulge comes from shadows outside the “region of opposition” which cause the light to “fall off in a circular fashion around the opposition point.” Throw in some “coherent backscatter” – electromagnetic signals scattering as they bounce back at Cassini – and you have an explanation for the big bad bulge in the B ring that sounds like it was written by NASA’s lawyers and public relations staff. “Nothing to worry about here. Move along. Have you seen our photos from Pluto?”

To add to the “no big deal” tone, NASA points out that Cassini photographed a similar bulge in the A ring on July 23, 2006 … 10 years ago. No big deal … just like the rip in the F ring seen in April or the “bends” in the A and F rings seen in June. 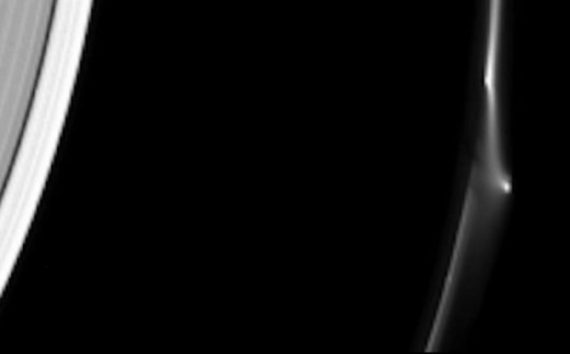 Rip in the F ring – no big deal

Is “optical illusion” become NASA’s alibi for all strange occurrences in Saturn’s rings? Is it making an “opposition surge” at Bergrun’s theories? Will Bergrun’s theories ultimately be proven right?
Wouldn’t “Big Bad Bulge in the B Ring” be a great name for a band?