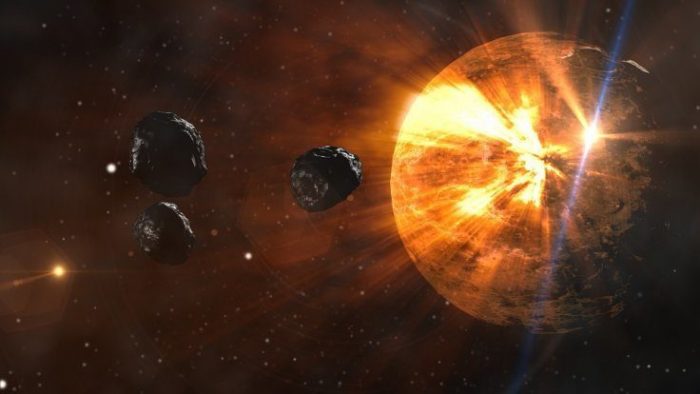 NASA’s asteroid tracking system is currently monitoring three space rocks that are expected to approach Earth tomorrow, Nov. 20. According to the agency, the biggest asteroid in the group is about half as tall as the Marina Bay Sands Hotel.

The first asteroid that will visit Earth’s vicinity tomorrow has been identified by NASA’s Center for Near-Earth Object Studies (CNEOS) as 2019 UK6. CNEOS indicated that this asteroid is currently flying towards Earth at an average speed of almost 28,000 kilometers per hour. With an estimated diameter of 110 meters, 2019 UK6 is the biggest asteroid in the group.

Trailing behind 2019 UK6 is an asteroid known as 2019 WF. According to CNEOS, this asteroid is the fastest in the group. The agency’s data indicates that 2019 WF currently flying at a velocity of about 42,000 kilometers per hour. CNEOS noted that this asteroid spans about 24 meters wide.

The last asteroid that’s expected to approach Earth tomorrow is called 2019 WE. This asteroid is traveling at an average velocity of almost 31,000 kilometers per hour and has an estimated diameter of around 27 meters.

According to CNEOS, 2019 WF and 2019 WE are classified as Apollo asteroids, which means their orbits intersect with that of Earth as the planet travels around the Sun. 2019 UK6, on the other hand, does not follow an Earth-crossing path. Instead, as an Amor asteroid, it follows a path that goes around both the Sun and the Earth. It only occasionally flies near the planet instead of crossing its path.

Although the three asteroids will have near-Earth approaches tomorrow, CNEOS’ data indicates that none of them are in danger of colliding with the planet. According to the agency, 2019 UK6 will fly past Earth tomorrow morning from a very safe distance of 0.03952 astronomical units, which is equivalent to 5.9 million kilometers away.