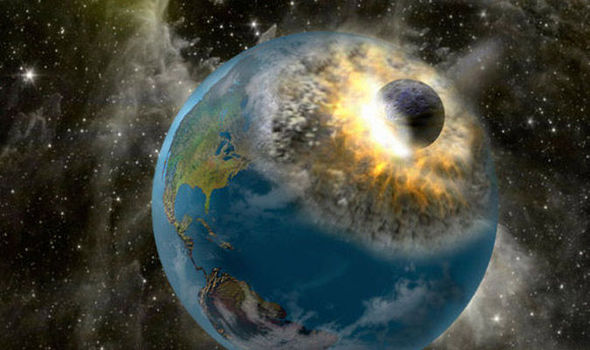 NASA has “lost” a large asteroid that is expected to whistle past the planet tomorrow and could even hit Earth – and the terrifying event is being broadcast live.

Due to ongoing uncertainty over the location of the space rock called 2013 TX68, astronomers are holding a special live broadcast to coincide with the event and to try to pin it down.

The “Near Earth Asteroid”, discovered in 2013, is on such an unknown path, that NASA originally thought it would make it’s close approach to Earth on March 5.

There is still a chance it may not get here until Tuesday, March 8 or Wednesday, March 9.

Experts are so uncertain about its path they say the 100 ft asteroid may pass as close as 11,000 miles, or as far as five or more million miles.

There are also fears it could strike us, flying into Earth as early as September 2017.

A spokesman from Slooh telescope online channel said: “There is a 1 in 250m chance it will hit Earth on September 28, 2017. Or is it 1 in 3? The facts keep changing because JPL has been unable to pin down its orbit.

“And therein lies the problem. NASA doesn’t know much about an asteroid that is just days from making its closest approach to Earth.

“That’s because astronomers lost the large chunk of potentially deadly space rock – it was last observed only ten days after it was discovered.

“The facts keep changing because JPL has been unable to pin down its orbit.”

Slooh will be using its robotic telescopes at its flagship observatory at the Institute of Astrophysics in the Canary Islands in an attempt to rediscover the space rock as it makes it’s close approach.

The spokesman added: “Join Slooh as we attempt to find the lost asteroid of Atlantis and discuss why NASA, despite a doubling of their budget to track asteroids, can’t possibly keep track of them all.”

Asteroids become meteors once they come into the Earth’s atmosphere.

At around 33 metres in length it is more than 50 per cent bigger than the 20-metre meteor which suddenly and unexpectedly hurtled at us above Chelyabinsk, Russia, in February 2013.

That meteor exploded with the force of a nuclear bomb above the shocked town.

The force of the explosion blew out the windows of hundreds of buildings and more than 1,000 people were injured by shards of glass.

Amazingly no one died.

The consequences of 2013 TX68 burning up in our atmosphere could be even more catastrophic, and it is believed an asteroid of 50 metres or more could potentially destroy London inside the M25.

But Mr Chodas has called for calm after a number of conspiracy theorists said the flybys this week or in 2017 could trigger the end of the world.

Others speculated NASA was hiding the true risk from the public for fear of anarchy.

Mr Chodas said: “The possibilities of collision on any of the three future flyby dates are far too small to be of any real concern.

“I fully expect any future observations to reduce the probability even more.”

NASA has now published a tweet claiming Earth is safe from the asteroid for at least 100 years.

It is scheduled to start from 11.59pm (GMT) on Wednesday, but is subject to change due to high uncertainty.