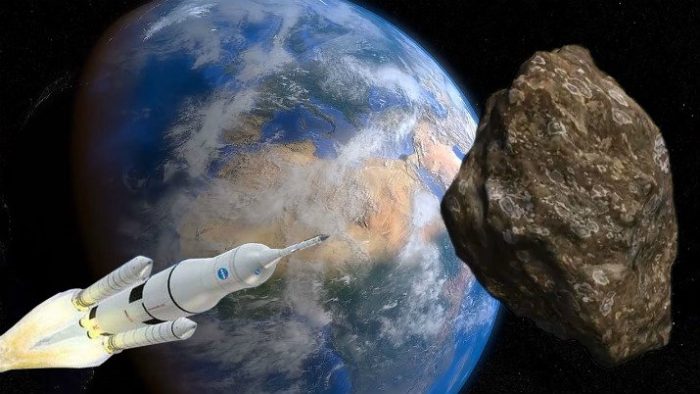 Have to admit, heck of a name for the program, won’t spoil it..read on.

With the chances of a huge asteroid hitting Earth and wiping out the human race looking unnervingly real, NASA and the National Nuclear Security Administration (NNSA) have put their heads together to develop a new spacecraft to deflect a potentially deadly space boulder heading towards our planet.

Aptly called HAMMER (Hypervelocity Asteroid Mitigation Mission for Emergency Response), the new spacecraft would either collide with an incoming asteroid to change its course away from Earth, or blow it up with a nuclear weapon, technology weblog ExtremeTech wrote.

As part of this effort, NASA has sent the OSIRIS-REx probe to a near-Earth asteroid called Bennu to collect a 2.1-ounce sample from its surface and bring it back to Earth later this year.

Calculating the probe’s trajectory for the hypothetical HAMMER mission, the researchers determined that there is a tiny 1-in-2,700 chance that Bennu could collide with our planet in 2035. Hitting Earth, the 1,600 foot, 74 billion pound Bennu would produce a 1.15 gigaton explosion, which is about 23 times larger than the most powerful hydrogen bomb ever detonated, and still only a fraction of the biggest asteroid out there.

Traveling at 22,000 miles an hour, the 8.8-ton HAMMER would still be unable to generate enough punch to nudge even a relatively small asteroid like Bennu off course.

NASA specialists believe that they would have to blow up a whole fleet of HAMMER spacecraft to slow down the asteroid and change its trajectory towards the sun.

In the event of a failure to deflect the asteroid early on, a nuclear version of HAMMER is also available, with current US nuclear weapons powerful enough to knock an incoming Bennu-sized asteroid off course.