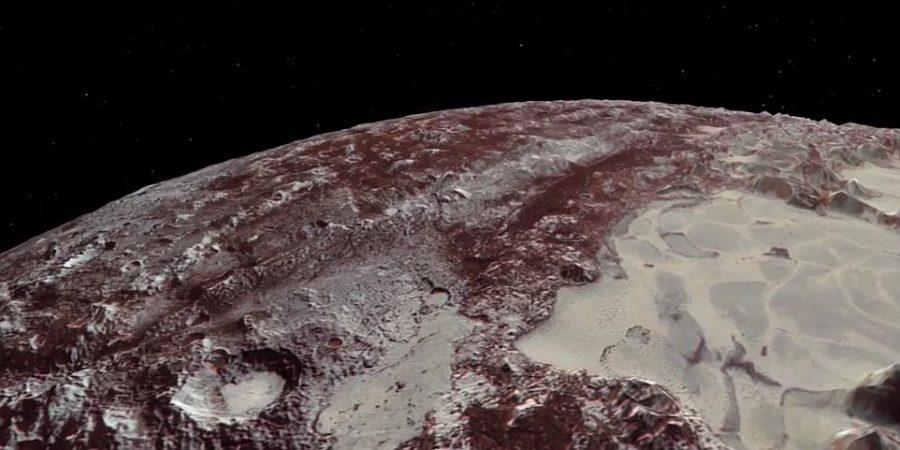 In the past I’ve found catchy NASA video headlines like “amazing flyover” etc. only to be disappointed with the videos but this one is FANTASTIC! It is short but a MUST WATCH in my humble opinion. Now that’s more like it NASA 🙂 Would love to see this type of flyover done for all the planets.

What would it be like to soar over the surface of ? (Headline Image Credit: NASA)

The footage has been constructed from the thousands of photographs taken by the New Horizons probe.

It’s difficult to believe that it has already been two whole years since mankind got its first ever close-up view of the surface of this tiny, distant and enigmatic world.

Now to celebrate this anniversary, NASA has released a new flyover video created from the huge collection of images New Horizons captured during its visit.

“Using actual New Horizons data and digital elevation models of Pluto and its largest moon Charon, mission scientists have created flyover movies that offer spectacular new perspectives of the many unusual features that were discovered and which have reshaped our views of the Pluto system – from a vantage point even closer than the spacecraft itself,” the video caption states.

“The viewer first passes over the western margin of Sputnik, where it borders the dark, cratered terrain of Cthulhu Macula, with the blocky mountain ranges located within the plains seen on the right.”

“The tour moves north past the rugged and fractured highlands of Voyager Terra and then turns southward over Pioneer Terra – which exhibits deep and wide pits – before concluding over the bladed terrain of Tartarus Dorsa in the far east of the encounter hemisphere.”