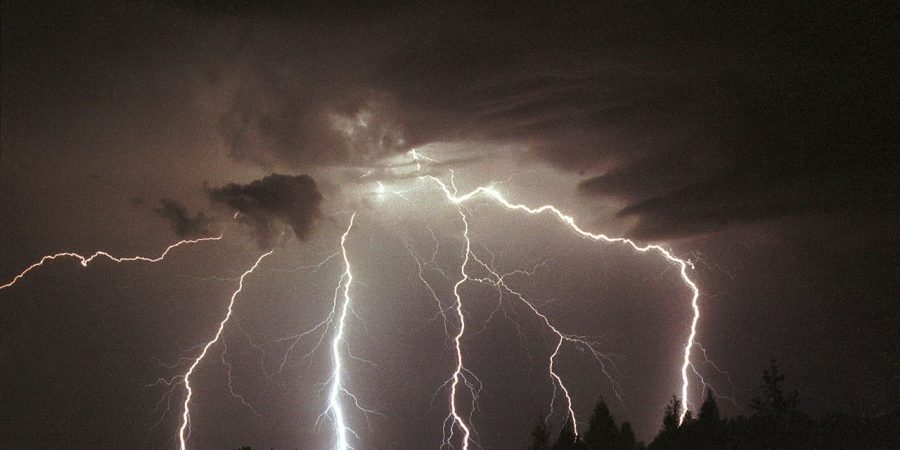 About a thousand times a day, thunderstorms fire off fleeting bursts of some of the highest-energy light naturally found on Earth. These events, called terrestrial gamma-ray flashes (TGFs), last less than a millisecond and produce gamma rays with tens of millions of times the energy of visible light. Since its launch in 2008, NASA’s Fermi Gamma-ray Space Telescope has recorded more than 4,000 TGFs, which scientists are studying to better understand how the phenomenon relates to lightning activity, storm strength and the life cycle of storms.

Now, for the first time, a team of NASA scientists has analyzed dozens of TGFs launched by the largest and strongest weather systems on the planet: tropical storms, hurricanes and typhoons. A paper describing the research was published March 16 in the Journal of Geophysical Research: Atmospheres.

“One result is a confirmation that storm intensity alone is not the key factor for producing TGFs,” said Oliver Roberts, who led the study at the University College Dublin, Ireland, and is now at NASA’s Marshall Space Flight Center in Huntsville, Alabama. “We found a few TGFs were made in the outer rain bands of major storms, hundreds of kilometers from the powerful eye walls at their centers, and one weak system that fired off several TGFs in a day.”

Scientists suspect TGFs arise from the strong electric fields near the tops of thunderstorms. Under certain conditions, these fields become strong enough to drive an “avalanche” of electrons upward at nearly the speed of light. When these accelerated electrons race past air molecules, their paths become deflected slightly. This change causes the electrons to emit gamma rays. 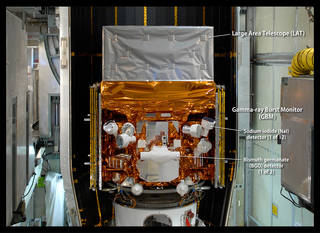 © NASA/Jim Grossmann
This photograph, taken in May 2008 as the Fermi Gamma-ray Space Telescope was being readied for launch, highlights the detectors of the spacecraft’s Gamma-ray Burst Monitor (GBM). An identical set of detectors is mounted on the opposite side of the spacecraft. The GBM is an array of 14 crystal detectors designed for transient lower-energy gamma-ray outbursts, such as TGFs.

This enhanced discovery rate helped the GBM team show that most TGFs also generate a strong pulse of very low frequency radio waves, signals previously attributed only to lightning. Facilities like the Total Lightning Network operated by Earth Networks in Germantown, Maryland, and the World Wide Lightning Location Network, a research collaboration run by the University of Washington in Seattle, can pinpoint lightning- and TGF-produced radio pulses to within 6 miles (10 km) anywhere on the globe.

“Combining TGF data from GBM with precise positions from these lightning detection networks has opened up our ability to connect the outbursts to individual storms and their components,” said co-author Michael Briggs, assistant director of the Center for Space Plasma and Aeronomic Research at University of Huntsville (UAH).

The team studied 37 TGFs associated with, among other storms, typhoons Nangka (2015) and Bolaven (2012), Hurricane Paula (2010), the 2013 tropical storms Sonia and Emang and Hurricane Manuel, and the disturbance that would later become Hurricane Julio in 2014.

“In our study, Julio holds the record for TGFs, firing off four within 100 minutes on Aug. 3, 2014, another the day after, and then no more for the life of the storm,” Roberts said. “Most of this activity occurred as Julio underwent rapid intensification into a tropical depression, but long before it had even become a named storm.”

What the scientists have learned so far is that TGFs from tropical systems do not have properties measurably different from other TGFs detected by Fermi. Weaker storms are capable of producing greater numbers of TGFs, which may arise anywhere in the storm. In more developed systems, like hurricanes and typhoons, TGFs are more common in the outermost rain bands, areas that also host the highest lightning rates in these storms.

Most of the tropical storm TGFs occurred as the systems intensified. Strengthening updrafts drive clouds higher into the atmosphere where they can generate powerful electric fields, setting the stage for intense lightning and for the electron avalanches thought to produce TGFs.

TGFs were discovered in 1992 by NASA’s Compton Gamma-Ray Observatory, which operated until 2000.

The Fermi Gamma-ray Space Telescope is an astrophysics and particle physics partnership managed by NASA’s Goddard Space Flight Center in Greenbelt, Maryland. Fermi was developed in collaboration with the U.S. Department of Energy, with important contributions from academic institutions and partners in France, Germany, Italy, Japan, Sweden and the United States.

The GBM Instrument Operations Center is located at the National Space Science Technology Center in Huntsville. The GBM team includes a collaboration of scientists from UAH, NASA’s Marshall Space Flight Center, the Max Planck Institute for Extraterrestrial Physics in Germany, University College Dublin in Ireland and other institutions.

Anthony Watts
Watts Up With That?